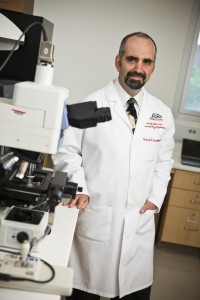 
Managing HIV treatment may never be the same.

Researchers at the University of Nebraska Medical Center have discovered a way to revolutionize the treatment of HIV. Early studies show UNMC’s novel approach could reduce the regimen to a single treatment once every month, eliminating the need for current strategies that require daily administration of medicine.

Antiretroviral therapies, or ART, are also ineffective at reaching viral reservoirs such as the lymph nodes and the central nervous system. These viral reservoirs essentially serve as a bunkers that shelter HIV from current medications. But UNMC researchers overcame this obstacle with a new nanoformulation called LASER ART.

LASER ART harnesses the power of the patient’s immune system to store and deliver ART medications throughout the entire body in a sustained release formulation.

LASER ART targets the immune system’s hunter cells, or macrophages, which roam the body on a perpetual seek and destroy mission looking for foreign invaders. LASER ART piggybacks on the macrophages, which have full access to all parts of the body, including the central nervous system—a particularly difficult system to hack for most modern medicines.

With further development LASER ART could have a dramatic impact on the estimated 34.2 million people on the planet who are affected by HIV. The Centers for Disease Control estimates 1.1 million Americans are living with HIV infection.

Antiretroviral Therapy for the Treatment of HIV
HIV is a major health threat that affects over 35 million people worldwide with over 50,000 new infections per year in the US alone. With the advent of antiretroviral therapy (ART), the management of HIV has greatly improved over the years. Despite this improvement many of the drugs used in ART cocktails have limited capacity to gain access to viral reservoirs in areas such as the lymph nodes and central nervous system.

Current therapies require patients to take their medication daily and some of these therapies have significant side effects. Therefore it has been suggested that the development of a long acting ART formulation could greatly improve patient adherence to ART and also allow greater access to viral reservoirs.

Researchers at the University of Nebraska Medical Center have developed targeted long acting nanoformulations of ART called LASER ART. LASER ART is comprised of a polymeric shell that encapsulates the desired drug. The polymers can be conjugated to a variety of targeting moieties to enhance delivery of the drugs to specific cells and/or tissues.