Vaccine may signal beginning of end to Parkinson’s disease

Vaccine may signal beginning of end to Parkinson’s disease 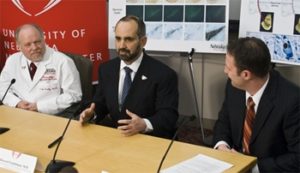 A novel combination developed by researchers at the University of Nebraska Medical Center may be the final solution that could deliver a knockout blow to Parkinson’s disease.

Howard Gendleman, M.D., and his team believe they are on the verge of producing an effective vaccine to battle the debilitating disorder that affects more than 1 million Americans. Right now, the only treatment options for Parkinson’s—the world’s second-leading neurodegenerative disorder behind Alzheimer’s—are methods for reducing symptoms.

But if Gendleman’s approach succeeds, the immune systems of vaccinated patients will be armed to fend off the disease and prevent its disastrous effects.

The vaccine turns an old foe into a potential ally.

Vaccination with a protein, alpha-synuclein, alone actually has the ability to make Parkinson’s even worse. But when the protein is paired with an immune modulator, it promotes an immune response that protects brain cells from further damage.

Preclinical studies show a remarkable 91 percent survival rate of neurons in treated laboratory mice. In January 2014, early stage clinical trial testing began on one of the vaccine’s critical components. The early test will help determine if the immune system of a Parkinson’s patient can be successfully modulated.

One of the key neuropathological hallmarks of Parkinson’s Disease is the presence of Lewy bodies within the cell body of neurons. Lewy bodies are intracellular inclusions that are composed of aggregated α-synuclein protein-specifically a nitrated form of α-synuclein (N-α-Syn), which activates microglial cells leading to enhanced neuronal degeneration.

One potential way to treat Parkinson’s disease is through the use of a therapeutic vaccine, however N-α-syn alone induces a profound effector T cell response and actually exacerbates neuroinflammation and neurodegeneration.

To combat this problem, researchers at the University of Nebraska Medical center have developed a novel vaccine strategy capable of both preventing disease onset as well as preventing disease progression. The vaccine combines the immunogen, N-α-Syn, and a molecular adjuvant that is capable of promoting a regulatory adaptive immune response (regulatory T cell response) such as vasoactive intestinal peptide (VIP) or GM-CSF.

The unique combination of an adjuvant capable of stimulating regulatory T cells with N-α-syn can elicit an adaptive immune response that prevents further neuronal damage due to inflammation thus resulting in neuroprotection.

Testing of the Parkinson’s vaccine strategy was carried out in mice using MPTP intoxication to induce neuronal cell death and inflammation in the substantia nigra pars compacta. Treatment of mice with MPTP and N-α-syn induced activation of microglia cells (measured by presence of Mac-1) and caused increased neuronal cell injury (measured by FJ-C staining). However, using the novel vaccination strategy of combining N-α-syn with VIP resulted in a decrease in activated microglia by 61 percent and a 64 percent decrease in neuronal injury.

These data demonstrate the effectiveness of the novel combination of N-α-syn and VIP as a vaccine for Parkinson’s Disease. This vaccine was able to reduce the activation of microglia cells and neuronal cell injury while also greatly increasing the survival rate of dopaminergic neurons within the substantia nigra.