OMAHA, Neb. (August 7, 2014)—Researchers at the University of Nebraska Medical Center are among the most inventive in the country, according to information provided to an exclusive audience of administrators, faculty and staff during UNeMed Corporation’s shareholder meeting Tuesday evening at TD Ameritrade Park’s Skybox Lounge. 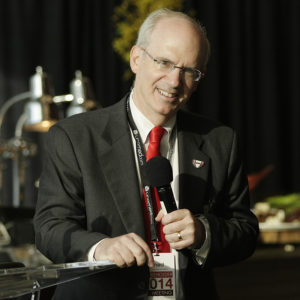 The meeting featured brief remarks from UNMC Chancellor Jeffrey P. Gold, M.D., who outlined his support for commercialization efforts. He was followed by Michael Dixon, Ph.D., the president and CEO at UNeMed—the technology transfer and commercialization arm of UNMC.

Dr. Dixon called UNMC researchers an “inventive group,” citing the most recent data from the Association of University Technology Managers, which shows UNMC’s 7.48 inventions for every $10 million spent was fifth in the nation.

“We are definitely on the national radar screen,” said Dr. Gold, referring to a national poll that predictably showed people most often associated the University of Nebraska with football. The second thing they connected to Nebraska was healthcare, according to Dr. Gold.

Dr. Dixon also noted that 75 UNMC technologies are currently under license, with 39 helping improve lives as products on the market.

Improving the “human condition” is a key component of Dr. Gold’s vision for UNMC research. He told an estimated crowd of 80 that research doesn’t end after publishing a paper in an academic journal or when a grant expires.

“The research is done when a human life is changed,” Gold said.

He added: “It’s the people in this room that carry out the final step, that take it from the laboratory into the realm of reality, so it changes the lives of patients today and tomorrow and for generations and generations to come.”

The UNMC Chancellor is the lone shareholder, serving as proxy for Nebraska’s University Technology Development Corporation, which owns UNeMed.

Dr. Dixon reported $1.17 million in total revenue during the previous fiscal year. He said it was comparable to Northwestern University before a successful licensing deal netted the Chicago-based Big Ten Conference member more than $2.3 billion with the development of Lyrica, an anti-seizure medication. 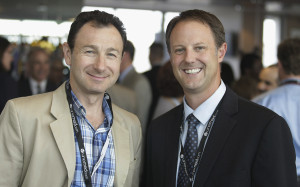 “That’s why we’re going to keep taking at-bats,” Dixon said. “Because it takes just one swing for a home run.” 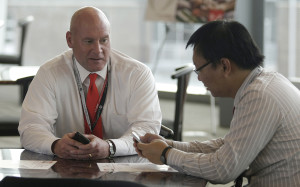 D.J. Thayer (left), the Director of International and Domestic Affairs for UNeMed and UNMC, chats with Bo Han, M.D., Ph.D., who will serve in China as a business development specialist for UNeMed Health Consulting-Shanghai (UHCS). (Photo: Charlie Litton/UNeMed)

To lead the growing international efforts, Dr. Dixon announced the addition of D.J. Thayer, who joined UNMC and UNeMed in early July as the director of international and domestic affairs. Thayer, President of infoUSA Inc. for 10 years, will lead UNMC’s international activities, particularly as it establishes operations in China. And new agreements in China are currently under negotiation, Dr. Dixon said.

He also highlighted recent fund-raising efforts for local startup companies that were built on UNMC innovations. In the last three years, UNMC entrepreneurs have raised more than $10 million in a burgeoning Omaha startup environment that CNN Money rated No. 3 in the country.

Dr. Gold concluded his remarks with the idea that research funding was not a gift, but a necessary investment for greater prosperity and health.

“It’s an investment that will convert this intellectual property—and all of your hard work in your research labs—into the future cures and the ways we prevent disease in our country and in our community,” he said.