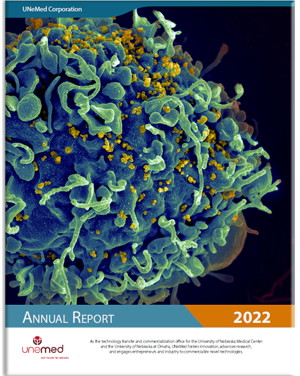 RespirAI is a startup built on a University of Nebraska at Omaha innovation that could help patients suffering from chronic obstructive pulmonary disease, or COPD. Near the end of the calendar year, RespirAI closed a successful financing round worth almost $1 million.

Exavir Therapeutics also announced a successful financing effort, closing a seed round with $4 million in investments, led by AlleyCorp and Gilead Sciences. Exavir was co-founded by UNMC researchers Howard Gendelman, MD, and Benson Edagwa, PhD, who are working on ultra-long-acting antiretroviral therapies for HIV.

The annual report also looks back at new initiatives UNeMed launched or joined during the previous fiscal year, such as their first “Back-o-the-Napkin” contest, the “Innovations & Libations” networking event, and a national program geared toward helping build the local entrepreneurial ecosystem.

In addition to presenting core metrics for all of UNeMed’s activities, the annual report also features several portfolio technologies with great potential for additional development.

The complete annual report can be viewed online, and printed copies are also available. Contact UNeMed to receive a free printed copy.