WASHINGTON, D.C. (Aug. 29, 2016)—Two Nebraska startup companies based on university research were selected from a field of 200 applicants to join a national Demo Day next month and present their technologies before 400 potential investors and members of Congress.

“This is fantastic news,” said Michael Dixon, Ph.D., president and CEO of UNeMed. “The competition is pretty fierce in the world of startup companies. This speaks volumes for the quality of these two companies and the cutting-edge therapies that they are delivering.”

Only 35 startup companies made the final cut for the first-ever University Startups Demo Day on Sept. 20, held by the National Council of Entrepreneurial Tech Transfer, an association of university startup officers. Among the 35 were two Nebraska biotech startups, Calidum Inc. and Orion BioScience Inc. 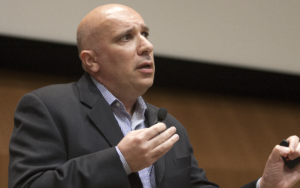 Calidum is built around a technology created by University of Nebraska Medical Center researcher Janina Baranowska-Kortlyewicz, Ph.D. She developed a compound that can be used for more effective cancer treatments and diagnostics. Calidum is finalizing plans for its first Phase I clinical trial on prostate cancer patients.

“I think the technology has strong potential,” Calidum chairman Sam Al-Murrani, Ph.D., said. “This will be an excellent opportunity to talk to the right people.”

Orion is based on a University of Kansas innovation, but the company established its base of operations in Omaha so it could be closer to its clinical partner, UNMC. Orion specializes in therapies that relieve short- and long-term eye diseases associated with autoimmune disorders.

The primary goals of the University Startups Demo Day were to give early-stage companies added exposure to potential investors, while demonstrating to Congress the value of university research to the national economy.

“The University Startups Demo Day is the university community’s opportunity to show the nation how far it’s come in its bold, new vision for the future of the university, and how that vision is central to national competitiveness and economic growth, peace and prosperity,” the National Council of Entrepreneurial Tech Transfer said in a recent press release. “University Startups presenting at the Demo Day have individual stories to tell about the good work they are doing to create jobs, serve humanity and leave the world a better place for the next generation.”