LINCOLN, Neb. (Feb. 20, 2014)—After hearing roundly positive support for a bill that would extend the sunset on the Business Innovation Act Wednesday afternoon, the Nebraska Legislature Appropriations Committee returned the next morning and marked the bill, LB 1114, as “priority” legislation—increasing the chances it will see a final vote before the current legislative session closes in April.

Co-sponsored by appropriations committee chairman Heath Mello of Omaha and Galen Hadley of Kearney, LB 1114 extends the Business Innovation Act from its original expiration date by five years, to Dec. 1, 2021. 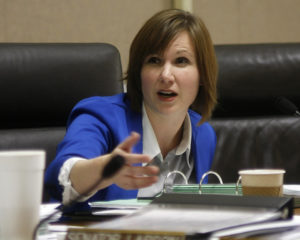 Passed in 2011, the Business Innovation Act created a mechanism for the state to provide funding and assistance to small or new Nebraska companies that need financial help with critical research or with building expensive prototypes.

Seven prominent business leaders and entrepreneurs—from as far as Texas and California—testified in support of the bill at the Feb. 19 committee meeting, including Michael Dixon, president and CEO of UNeMed Corporation, the technology transfer office for the University of Nebraska Medical Center.

“I think this program is absolutely a leg up,” Dixon told the committee, “or at least puts us on the same footing as other states with a similar program.”

No one testified in opposition to the bill.

Several proponents noted that Nebraska has ranked at or near the bottom when measured against other states’ entrepreneurial and venture capital environments. But that has begun to change since implementation of the Business Innovation Act.

“Nebraska is starting to show up in top 10 lists,” said Dixon, who also sits on the Board of Directors for Invest Nebraska—a funding program in the Nebraska Department of Economic Development aimed at encouraging small businesses, innovation and entrepreneurship.

Thanks to the Business Innovation Act, Nebraska is on the verge of an “entrepreneurial renaissance,” Dixon said.

Extending the end date on the Business Innovation Act would give it a better chance to realize its full potential, Sen. Mello said during his opening remarks.

“Venture capital is an area where more long-term planning would be critical,” Mello said.

The extension includes a provision for creating a fund to study best practices and research other methods to “support and increase venture capital in Nebraska.” The bill also earmarks $50,000 to create a “High Growth Business Development Cash Fund” to be used to pay for the commissioned study, which will be due at the end of the year on Dec. 1.

Only one committee member appeared to challenge the merits of the bill. District 2 Senator Bill Kintner of Papillion questioned why taxpayers should essentially “subsidize” small business ventures.

The benefits, according to those who commented, centered on increasing job and economic growth in the state while attracting additional investment from outside Nebraska.

“The hardest money to raise is that first money,” said Bruce Lichorowic, CEO of Trak Surgical. Lichorowic is a self-described “serial entrepreneur” based in San Jose, Calif., who has raised more than $500 million in venture capital for more than 20 startup companies in a career that spans 30 years.

His latest venture, Trak Surgical in Omaha, is a new surgical tool company based on technology developed at the University of Nebraska Medical Center.

“I wish California had a program like this. It does not,” Lichorowic said. “This early stage money is really, really important. It got me here.”

Joseph Knecht, managing director at VentureTech in Lincoln, also supported LB1114. The New York native said he would not be in Nebraska if not for the Business Innovation Act.

Kintner, the senator from Papillion, asked Knecht: “Is there a downside to this program? There’s got to be a downside.”

“The only risk is not doing it,” Knecht said.