A scientific research journal, PLOS One, published in its September issue an article by a team of scientists at the University of Nebraska Medical Center who found a biomarker that could “allow for the assessment of a future cardiovascular event.” 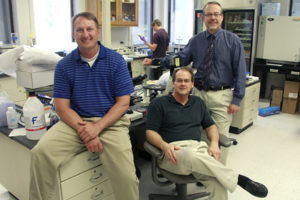 An interdisciplinary team of researchers at the University of Nebraska Medical Center in Omaha—Michael Duryee (left), Geoff Thiele (center) and Dan Anderson (right)—believe they found a way to determine who will develop potentially deadly heart disease with a simple blood test.

Lead author and project collaborator, Dan Anderson, M.D., Ph.D., will discuss the research and its possible implications during UNMC Technology Demonstration Day on Oct. 21. Anderson, who is also a practicing cardiologist, will be among six others presenting some of the most recent and advanced innovations developed at UNMC and UNO laboratories.

Anderson and UNMC colleagues Geoffrey Thiele, Ph.D., and Michael Duryee are working on developing a simple blood test for the biomarker, which could give patients potentially years of advance warning if they carry the unstable version of the disease.

Such an early diagnosis could dramatically change how cardiologists treat patients, advancing cardiac care to an improved, more targeted and personalized approach.

Hosted by UNeMed, the technology transfer office at UNMC, Demo Day is a part of Innovation Week, a celebration of the research, discovery and innovation at UNMC. Demo Day is aimed at a general audience and is free and open for anyone to attend. Registrations are requested.