Hanjun Wang named Innovator of the Year at 2021 Innovation Awards 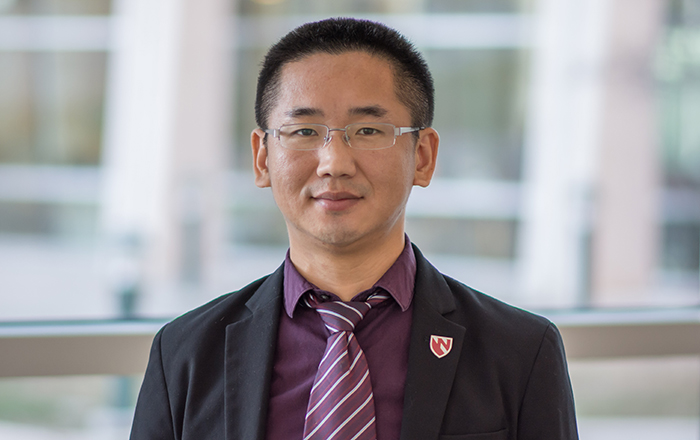 OMAHA, Nebraska (February 10, 2022)—UNeMed’s annual Innovation Week concluded today with its Research Innovation Awards Ceremony, which featured a Most Promising New Invention, the Startup of the Year and the Innovator of the Year.

For the second time in the event’s 15-year history, the Innovation Awards was a virtual event in response to concerns related to the ongoing pandemic. Originally scheduled for October, the event was postponed with the hope that a delay would allow for an in-person ceremony. Instead, UNeMed hosted the ceremony via Zoom.

A recording of the entire ceremony is available on UNeMed’s YouTube channel at https://youtu.be/2TU55sKYNUs.


The highlight of the event was the awards ceremony, where UNeMed recognized all the inventors who contributed to a new invention disclosure, secured a U.S. patent or had a technology licensed. In addition, three special awards were presented, including Hanjun Wang, MD, as the 2021 Innovator of the Year.

More specifically, his team is looking at the role spinal afferent neurons play in regulating disease onset and progression. He has identified a number of different approaches to target spinal afferent neurons. One of these approaches focuses on localized administration of resiniferatoxin, a potent neurotoxin that can ablate specific nerves. Dr. Wang is exploring resiniferatoxin as a possible treatment for hypertension, heart failure, acute respiratory distress syndrome and peripheral artery disease.

Some of those applications have been licensed by an undisclosed biotech company that is working on developing them for clinical use. As part of this relationship, Dr. Wang has helped bring in more than $1.1 million in sponsored research to develop this therapeutic approach.

In addition, Dr. Wang has developed other approaches for targeting spinal afferent neurons. One of which has been licensed into a startup company, Inflaneurgo, which is working on finding a partner to help advance some of these ideas.

In total, Dr. Wang has submitted 13 inventions, including three in fiscal year 2021. These inventions have resulted in 21 active patents and patent applications, three license agreements, and two sponsored research agreements.

The “Improved Self-Pacing Treadmill” adjusts its speed to the runner—whether a user wants to run, walk or trot, the treadmill adjusts to the user’s pace, without needing any other input. In speeding up or slowing down to match a runner’s speed, the new treadmill will make home and gym workouts safer and more realistic.

Dr. Wang, a professor of pharmaceutical sciences in the College of Pharmacy, created a thermosensitive hydrogel formulation called ProGel, a novel platform technology that can deliver a variety of therapeutics. ProGel has attracted wide interest as the cornerstone technology for his startup.

More information about Innovation Week and the Innovation Awards ceremony, including its history and awardees, can be found at https://www.unemed.com/innovation-week.