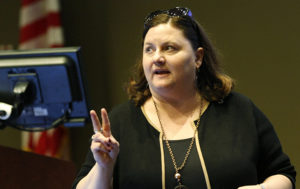 OMAHA, Neb. (March 30, 2016)—The regional director for the Rocky Mountain Area of the U.S. Patent and Trademark Office, Molly Kocialski, capped a three-day visit to Nebraska with a public forum at the University of Nebraska at Omaha’s College of Business.

Kocialski didn’t get beyond more than 10 minutes into her planned remarks of the two-hour session before members of an estimated crowd of 50 began peppering the former patent attorney with questions. The planned lecture quickly evolved into an impromptu conversation that took onlookers on a sometimes amusing and fascinating and other times deep and spirited dive into the finer points of the U.S patent system.

Kocialski’s planned remarks began with what promised to be a list of what she called “Molly’s Rules” for intellectual property.

The first rule: He or she who creates, owns; absent an agreement to the contrary.

The second: Your words can and will be used against you.

She did not get the chance to list a third.

Instead, the conversation in Mammel Hall’s auditorium swirled between a wide range of intellectual property areas that ranged from so-called “patent trolls” and patentable subject matter to invention ownership, international property rights and trademarks.