“There were more than 200 companies nationwide who applied for this opportunity,” UNeMed President and CEO Michael Dixon, Ph.D., said. “Getting two Nebraska startup companies into the room demonstrates the University’s commitment to growing the state’s biomedical economy.” 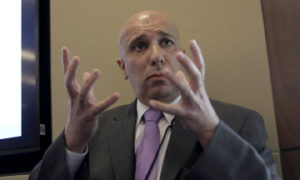 Calidum Chairman Sam Al-Murrani, Ph.D., addresses a standing room only crowd during the National Council of Entrepreneurial Tech Transfer’s Best University Startups of 2016, a national demo day in Washington D.C. on Sept. 20, 2016. Calidum is developing a radiopharmaceutical invented at the University of Nebraska Medical Center that could dramatically change how some cancers are diagnosed, monitored and treated.

In all, the selected companies represented 17 states and the District of Columbia at the national demo day. Pennsylvania had the most with five startups presenting. California, New Jersey, New York, North Carolina and Ohio all had three apiece. Nebraska was joined by D.C. and Minnesota as the only other areas with multiple entries at two apiece. The remaining states, with one presentation each, were Alaska, Delaware, Iowa, Missouri, New Mexico, North Dakota, Texas, Vermont and Virginia.

Calidum is based on a technology invented at the University of Nebraska Medical Center. The technology specifically targets certain types of cancer for more effective treatments and diagnoses. Calidum’s president, Sam Al-Murrani, Ph.D., delivered the presentation.

Orion is based on a technology invented at the University of Kansas, but relocated its headquarters to Omaha for Nebraska’s startup-friendly climate. Moving to Omaha also brings Orion closer to its clinical partner, UNMC. Orion is built around a platform technology that looks to restore immune tolerance as a way to cure autoimmune diseases. 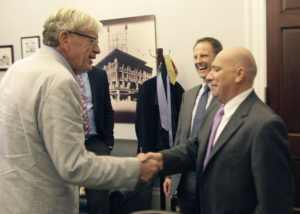 Sen. Brad Ashford (left) shares a joke as he meets with Calidum’s Sam Al-Murrani while UNeMed’s Michael Dixon looks on.

“The best part is the presentations did exactly what we hoped they would do,” Dr. Dixon said. “Both companies made significant connections to major biomedical and venture capital organizations. Building relationships like that can be tremendously difficult, but it’s a huge part of successfully commercializing a university technology.”

Biomedical startups often run into funding shortfalls after the initial federal grant programs, which typically financed initial discoveries. But it is usually industrial financing that supports the hefty price tag of product development. 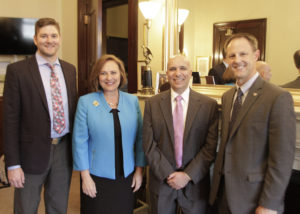 Between those two resources, however, biomedical innovations often languish in a so-called “valley of death.” That valley represents a wide gap where a technology is too far along for further federal funding, yet paradoxically too far away to encourage support from industrial or investment groups.

The National Council of Entrepreneurial Tech Transfer hosted and sponsored the national demo day. According to its website, another national demo day is planned for April 18-20, 2017. The application deadline for the “Best University Startups of 2017” is Dec. 15, 2016.