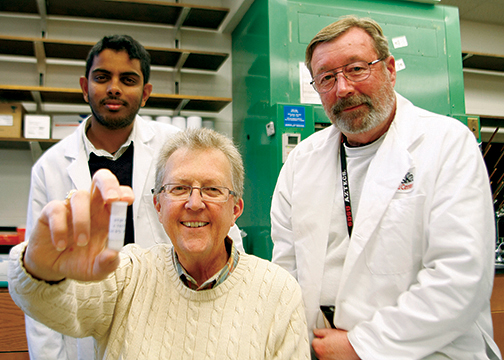 ProTransit Nanotherapy president and CEO Gary Madsen, Ph.D., (center) shows off a vial of prototypes that could one day be incorporated into skin care products such as sunscreen and cosmetics. The nanoparticles, formulated by scientists Bala Vamsi Karuturi, Ph.D.,(left) and Steve Curran (right), are vehicles that can deliver powerful antioxidants to the deepest layers of skin where they can help prevent skin cancer, wrinkles and blemishes. (Photo: Charlie Litton/UNeMed)

OMAHA, Neb. (Nov. 21, 2014)—A biotech startup in Omaha reached a major milestone, completing its first round of fundraising and inched a step closer to providing skincare products that prevent skin cancer, wrinkles and other blemishes. The investment also keeps hope alive the company will be able to expand as intended to create applications that can treat brain damage caused by stroke and even heal spinal cord damage.

ProTransit Nanotherapy, a company based on a technology invented at the University of Nebraska Medical Center, announced Monday a $100,000 investment from Invest Nebraska, a program administered by the state’s Department of Economic Development that focuses on fostering high-growth, high-paying industry startups and small businesses in Nebraska.

ProTransit Nanotherapy’s location on UNMC campus and its place in Omaha’s growing biotech industry were factors in Invest Nebraska’s decision. But Mark Crawford, Invest Nebraska’s CEO and investment manager, said the largest factor was about ProTransit’s co-founding president and CEO, Gary Madsen. Crawford said he “invests in people, not companies.” 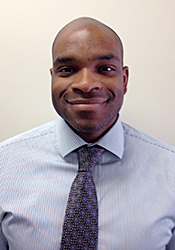 “What attracted us to Gary was that he’s a seasoned biotech CEO,” Crawford said. “Gary’s decision to start his company in Nebraska shows the growth of our ecosystem.”

“That’s going to allow us to really get up and running here in this laboratory, buying equipment, and buying supplies,” Madsen said.

ProTransit Nanotherapy will begin development of bench-scale products, and move nanoparticle production to Omaha from the Cleveland Clinic in Ohio, where co-founder and inventor Vinod Labhasetwar, Ph.D., now works.

“The really good thing is both of these guys have worked on exactly these type of nanoparticles before,” Madsen said. “I never thought I would find anyone like that, and here’s two of them right on campus.” 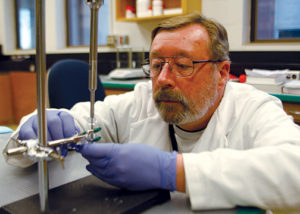 ProTransit Nanotherapy’s Steve Curran demonstrates part of the process for building the nanoparticles that could one day make skin care products much more effective in preventing skin cancer, wrinkles and blemishes. ProTransit is an Omaha startup company based on technology invented at the University of Nebraska Medical Center. (Photo: Charlie Litton/UNeMed)

Before joining ProTransit, Curran and Karuturi worked in laboratories of Dr. Joseph Vetro in the College of Pharmacy, specializing in building the type of nanoparticles that Madsen expects will deliver powerful antioxidants to the deepest layers of skin.

Dangerous UV light from the sun, chemicals, smoke, smog and even the natural aging process create free radicals within the skin. If unchecked, free radicals bang around inside the tissue, damaging cells, which leads to things like wrinkles, blemishes and even cancer. Antioxidant enzymes are known to be an effective treatment against free radicals, but stabilizing and getting the enzymes to where they’re needed has been the tricky part.

Developed by a former UNMC researcher, Dr. Labhasetwar, ProTransit’s nanoparticles essentially serve as a delivery vehicle that can reach places within the human system that others can’t. That means antioxidant enzymes can finally penetrate to the deepest layers of skin where they can do the most good, Madsen said.

“Up till now,” Madsen said, “the problem with the enzymes is they don’t penetrate the skin, and they’re really unstable. They last for just a few minutes.”

By enclosing the enzymes in a harmless, biodegradable nanoparticle, Dr. Labhasetwar not only stabilized the enzymes, but also created a slower, more gradual release. 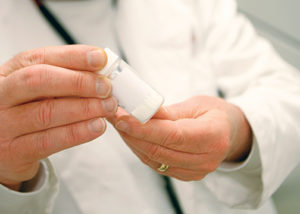 Once formulated, the nanoparticles made by ProTransit Nanotherapy look like a fine white powder.

Applying a skin product with ProTransit’s technology could have a lasting effect that battles free radicals for weeks after just one application. Finding out just how long and how effective will be part of the early round of testing. Testing for the skin care products will be done on artificial skin and tissue cultures grown in a lab.

Madsen was also involved in securing a recent $1.2 million grant from the Nebraska Research Initiative at the University of Nebraska to upgrade and purchase new equipment in the biologics production facility. That money is being used to equip the nanoparticle pilot plant that Madsen—along with UNMC researchers on other projects—is using for early-stage production.

Madsen said he expects to move into a phase-two round of fundraising where he will need an estimated $1.2 million to scale-up the process, and fully develop the skincare product. Although one of the world’s largest cosmetic manufacturers is already expressing interest in ProTransit’s first product line, it will likely be several years before it will be available on store shelves, Madsen said. 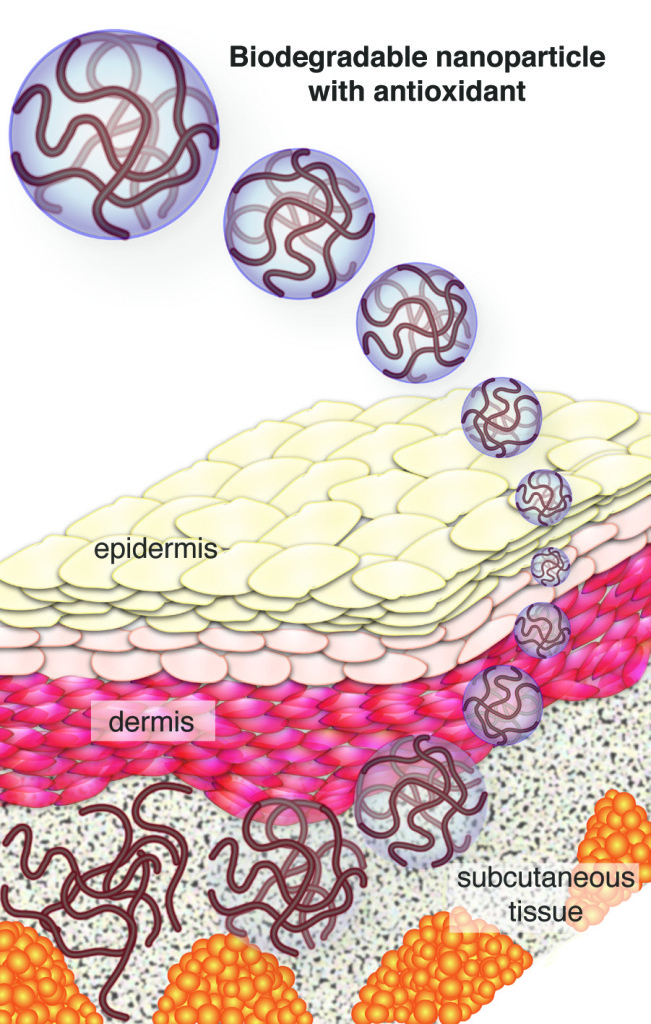 One Response to Nebraska invests $100k in UNMC nanotech startup