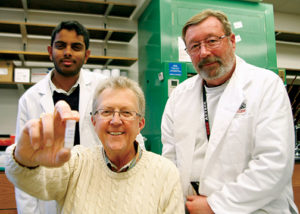 ProTransit Nanotherapy president and CEO Gary Madsen, Ph.D., (center) shows off a vial of prototypes that could one day be incorporated into skin care products such as sunscreen and cosmetics. The nanoparticles, formulated by scientists Steve Curran and Bala Vamsi Karuturi, Ph.D.,(left) and Steve Curran (right), are vehicles that can deliver powerful antioxidants to the deepest layers of skin where they can help prevent skin cancer, wrinkles and blemishes.

CLEVELAND, Ohio (March 7, 2017)—A $1.7 million grant from the Department of Defense is expected to push Omaha startup ProTransit Nanotherapy closer to FDA approval on a new treatment for acute spinal injuries, according to a press release issued today.

A portion of the award will help ProTransit use UNMC’s Nebraska Nanomedicine Production Plant to optimize the production of a proprietary nanoparticle. The nanoparticle was invented by former UNMC researcher Vinod Labhasetwar, Ph.D.

Now a professor of biomedical engineering at Cleveland Clinic, Dr. Labhasetwar’s innovative nanoparticle has shown dramatic potential when injected immediately after a spinal injury. Called Pro-NP™, the technology has shown the ability to prevent further damage to the spinal cord. It may also encourage the body’s natural repair mechanism to heal the injury, the release said.

Further tests will be a deeper study of the overall treatment effects. If successful, results from those studies will then drive an investigational new drug application with the FDA—a critical first step toward a clinical trial in human patients. Spine surgeon and Canada Research Chair in Spinal Injury, Brian Kwon, M.D., Ph.D., will lead the additional studies out of the University of British Columbia in Vancouver.

According to the press release, the grant attracted interest from the DOD for its potential to be used in battlefield conditions, either “on site or en route to a trauma center.” The technology also has clear civilian applications as a treatment that paramedics could inject in emergencies.

In addition to the new spinal treatment, ProTransit is also developing a topical skin application that could prevent skin cancer while eliminating or reducing wrinkles and other blemishes.

ProTransit Nanotherapy was co-founded by Dr. Labhasetwar and CEO Gary Madsen, Ph.D. Dr. Madsen is the former Entrepreneur in Residence at UNeMed, the technology transfer office at the University of Nebraska Medical Center.