OMAHA, Neb. (March, 25, 2015)—Long before Nebraska’s largest city landed on any national top 10 lists for its startup scene. Long before the state carved out incentives and initiatives to promote high-tech business growth and development. Long before anyone thought Nebraska was a good place to start a biomedical company, there was Randy Jones and his ideas for better MRI scanners. 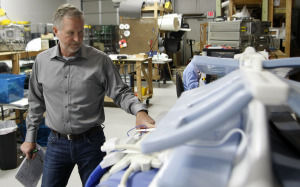 ScanMed founder and CEO Randy Jones, Ph.D., looks over one his prototypes for an MRI scanning coil that will help physicians finally get detailed images of a patient’s lung tissue. (Photo: Charlie Litton)

Jones, who holds a doctorate in electrical engineering, founded ScanMed of Resonance Innovations in his basement as a four-man operation in the mid-1990s: Back when most other medical device companies were running to biomedical hubs like Cleveland or Minneapolis.

Jones stuck with Nebraska, and it’s finally starting to pay off.

In the last three years, his business has exploded to a multimillion dollar company with a growing national reputation for rebuilding, repairing and developing new and innovative coils for magnetic resonance imaging scanners, or MRIs. After 10 tumultuous years of innovations, breakthroughs and setbacks, ScanMed’s next generation of coils—and its burgeoning repair service—has finally turned the proverbial corner with more than 30 employees and a three-year facility expansion that has grown from 5,000 to 15,000 square feet.

“All the conditions were right, finally,” Jones said. “It’s still a little underutilized, which is good because we’re still growing. And this year is going to be a tremendous growth year.”

Jones said the company enjoyed a 99 percent growth in 2013, and used that momentum to expand operations in 2014. In 2014, ScanMed cut into its growth rate with more than $1 million investment in product development and additional hardware.

A key piece of nearly exponential growth was a 2012 buy-in from the state. With a $500,000 matching seed investment, ScanMed became the first company to receive investment funds from Invest Nebraska, a public-private venture development organization funded in part by the Nebraska Department of Economic Development. Invest Nebraska focuses on fostering high-growth, high-paying industry startups and small business in Nebraska.

“The fact that we got a lump sum of real capital was real helpful,” Jones said, “because we were able to buy, or at least put down deposits on, a lot of necessary equipment to get to our next growth plane.”

Jones said the infusion of cash from Invest Nebraska and other investors helped ScanMed install a 3D printer and one of the nation’s few fully-functioning MRI scanners not attached to a hospital or university. The scanner alone—a used version of General Electric’s most popular model—cost about $600,000 to purchase and install, and Jones said he already has plans to add to his arsenal a popular Siemens version.

Having a scanner on-site frees Jones and his team from renting scanner time at a local hospital. Now, they can test at will the kind of innovative products that are at the core of Jones’ passion for the business.

But the business wouldn’t have survived this long without a repair service division that “carried” ScanMed during a downturn in the medical device industry in 2008 and 2009.

“There were almost no new equipment purchases in almost two years,” Jones said “What does that do to a medical device company? You just die and go away.”

ScanMed paid the bills and survived the lean years with an MRI coil repair service that now fulfills orders from across the world. The repair service accounts for about half of ScanMed’s business, but it was the innovations that inspired ScanMed’s beginning. And it appears more innovation will pave its future.

ScanMed has developed innovative coils that focus an MRI’s powerful imaging technology on specific body parts. ScanMed products can show physicians problems in areas that previously remained elusive. Jones said he has an imaging coil that can accurately detect prostate cancer, and another that can read the notoriously difficult-to-see soft tissue in the lungs—which could have a profound impact on how physicians treat and diagnose chronic obstructive pulmonary disorder, or COPD.

“Having survived all the nasty stuff that we have survived,” Jones said, “I feel pretty comfortable with where we are.”