From the December 10, 2010 issue of the Midlands Business Journal. Reprinted with permission. 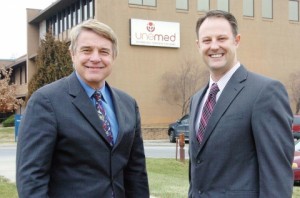 UNeMed’s work to see ideas and research become products and solutions that may be sold and used to advance health care is shown with the likes of Vireo Systems or Virtual Incision.

Vireo is a manufacturer of nutritional supplements with a brick and mortar presence in Plattsmouth, Neb., which has been an economic engine generating jobs and even overseas busi­ness. Virtual Incision Corp. is set to make its remotely controlled surgical tools available to health care practitioners. These research ini­tiatives-turned-viable businesses represent the seven of every 10 patents that go on to be licensed — and in turn available to industry — thanks to UNeMed’s support.

“One of the central criticisms of any tech­nology transfer is to patent things that are not available to industry,” said CEO Dr. James Linder. But in this case, he said, 70 percent of all the ideas are later commercialized and “sent out the door” to be used by the greater society.

This is in contrast to the industry average for programs comparable to UNeMed, which focus on taking intellectual property out of the lab and bringing it to the marketplace.

“The national average is 50-50,” said President Michael Dixon, Ph.D. As such, the idea has just as much of a chance of never be­ing broadly used, as it does of being utilized by industry; however, the odds are in favor of success on this front, with regard to UNeMed.

Specifically, Dixon said, as of mid- November there were 543 patents and patent applications. Of those, 377 are licensed.

“That means a company is working to develop it into a product,” he said.

Dixon said the total number grows by some 15 to 25 patents each year. With regard to actual license agreements, UNeMed ex­pects roughly 15 to 17 new ones every year. Last year, he said, it was on the higher end of the scale at 17. These new licensing agreements also represent a twofold increase over 2006 and 2007 figures, according to Dixon.

“Just looking at last year, our licensing revenue was $2.1 million, which was the most we’ve been able to generate with tech li­censing ever,” he said, noting this represents a tenfold increase in the past four to five years.

Linder attributes such boosts directly to Dixon and his team’s interfacing with in­dustry.

“We try to be an inventor-friendly office, as well as an industry-friendly office,” he said. “We want to see the technology put to use, and we’re not difficult to work with.”

For example, Linder noted that in addi­tion to listening to one’s needs, technology may be utilized for some time before full terms kick in, which helps to develop a relationship with what he coins a “mutually beneficial arrangement.”

UNeMed has also got a little help from some external factors.

“The country’s been in an economic downturn for a couple of years now and that’s caused a lot of job loss, and companies are looking for ways to get back on track,” Linder said. “There is more of a national emphasis on looking into universities and trying to understand there is technology there to try to utilize.”

In fact, Dixon referred to the $130 million in research activity at the med center, which shoots up to more than $350 million when combined with other research institutions, like Creighton University.

In turn, Linder said the organization’s team has worked hard to develop relation­ships and collaborate with other entities, such as the Peter Kiewit Institute. Linder is also on the board of the Halo Institute; based out of Creighton, it seeks to transform ideas into viable business in part through the guidance of existing business professionals.

UNeMed is also focusing on fostering relationships that enable long-term research to be funded, in a way that flies in the face of traditional funding, through the likes of NIH grants.

The UNeMed team supports entrepre­neurs in other ways as well, recently judg­ing three business plan competitions in one week. It’s also working to solidify plans for a technology commercialization and economic development conference, with a focus on government-related tech transfer, in March.

It’s expected that more than 100 universi­ties and 30 companies hailing from at least 17 states will be on hand.