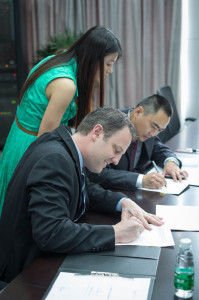 The agreement bridges research at UNMC to biotechnology production in China that could lead to additional research, funding and opportunities here and abroad, Jiang said in a translated email.

“This signing has not only marked a new stage of our collaboration,” Jiang said, “but also laid the foundation for us to build a higher level of innovation and development platform for technologies from UNeMed.”

The result is fresh breath that may last longer than the regular menthol. And a longer feeling of fresh breath could have a secondary impact as well.

“From the consumer prospective, it may help to improve people’s compliance to regular oral hygiene procedures and improve their oral health,” said Dr. Wang, an associate professor in UNMC’s Department of Pharmaceutical Science in the College of Pharmacy. 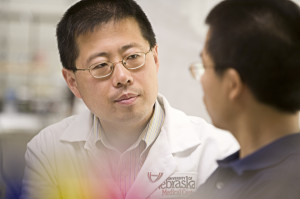 Bohe Biotech will focus on producing the new menthol derivative as an additive that could be used by companies who produce any number of oral hygiene products, such as mouthwash, floss, chewing gum or toothpaste.

If successful in China, Bohe could expand the licensing agreement to North America and Europe and enter international markets.

“Sitting in the middle of the country, we need to reach out and not only sell our beef and beans and corn,” Dr. Wang said, “but also share the intelligence and talent we have. There’s a lot of potential here on UNMC campus.”

The deal could also lead to wider success for Dr. Wang, who filed a number of patent applications he has developed while at UNMC, said Qian Zhang, UNeMed’s international licensing associate who drove the deal.

Bohe Biotech will first need to perform additional research and testing before gaining regulatory approval in China. The process could take about four or five years before Chinese consumers see a product on store shelves.

“On my deathbed,” Dr. Wang said, “if somebody tells me, ‘You just got something marketed and helped people,’ then I could say, ‘Amen,’ and close my eyes.”

One Response to UNeMed lands tech deal with Chinese startup