OMAHA, Neb. (June 19, 2013)—Thanks to research at the University of Nebraska Medical Center, the world might finally learn a solution to the alarming rise of antibiotic resistant bacteria. 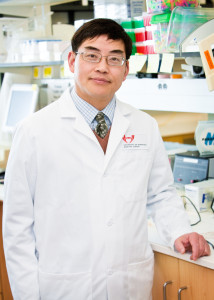 Dr. Wang, an assistant professor at UNMC, is an expert in the design and evaluation of tiny proteins called peptides. He has developed a process to regularly review all reports and publications to find new sequences of peptides, and catalogs them in a massive database. The database’s importance is underscored by a mention in the May 2013 edition of Nature Biotechnology, a nationally recognized peer-reviewed research journal.

The database can be used to find or even create peptides that have the potential for use as new medications, said Dr. Steve Hinrichs, chairman of the Pathology and Microbiology Department at UNMC.

“Dr. Wang is a very special scientist,” Dr. Hinrichs said. “He has the rare ability to work in multiple areas including proteomics, information technology and microbiology.”

One well-known peptide, insulin, regulates blood sugar, and antimicrobial peptides are the immune system’s first line of defense against invading microorganisms such as viruses, bacteria, or even cancer.

Peptides are a distinct improvement over traditional antibacterial medications in at least one respect—Bacteria are far less likely to develop a resistance.

It’s a novel approach to fighting infections, and one that might answer several alarms raised in recent months.

Dr. Margaret Chan, director general at the World Health Organization, told a conference of infectious disease experts in Copenhagen last May that the rise of antibiotic resistant bacteria could mean “an end to modern medicine as we know it.”

To make matters worse, there are too few new products emerging to stem the tide of so-called “superbugs,” according the Infectious Disease Society of America, or IDSA.

“Simply put, the antibiotic pipeline is on life support and novel solutions are required to resuscitate it — now,” IDSA president Dr. David Relman told Reuters in an April 2013 statement.

Dr. Wang at UNMC may have found that novel solution, and Taisho wants to help reload the pipeline with the next generation of effective antibacterial treatments.

“The key interest, for us, is it’s unlikely to cause a drug resistance,” said Dr. Toru Seo, deputy general manager at Taisho. “I think that’s where we see the leverage point using peptides.”

The concept of using peptides as an antibacterial agent is nothing new. But the technology to make it a practical reality is a much more recent development. The potential for peptides in the battle against infections is a “provocative” idea, said Dr. Seo of Taisho.

“The development of peptide therapeutics is a challenging task,” Dr. Wang said. “But it is on the frontier.”

Using the database, Dr. Wang and his team can now engineer peptides custom-built to defeat specific superbugs such as MRSA or methicillin-resistant Staphylococcus aureus—a dangerous bacterial infection that is resistant to most antibiotics.

Wang and his database can take peptides even further, engineering compounds to fight viral and fungal infections. There are non-medical applications as well, such as an antimicrobial peptide called nisin that has already been used in 50 countries as a food preservative. Antimicrobial peptides could also be used to treat building materials to resist rot and mold.

“He’s done great work, and has good leads,” said Dixon at UNeMed. “But they need to be developed. That’s where the relationship comes in.”

Dr. Wang’s research is still in early stages. It may be years before his work can be developed into an effective drug, but the partnership with Taisho represents a critical new chapter that brings his work one step closer to helping patients.

“This kind of investment is worthwhile because it helps us move the research forward,” Dr. Wang said, “and helps advance our understanding of how peptides work.”

That additional research doesn’t often happen without support and funding from companies like Taisho.

“Anything feasible generated in academia can be handed up to us, and we can develop it into a reality,” said Dr. Seo. “That’s what we’re good at.”