OMAHA, Nebraska (October 24, 2022)—UNeMed helped propel the University of Nebraska system to its best-ever ranking among the top 100 academic institutions throughout the world in earning United States patents.

The newly released report from the National Academy of Inventors and Intellectual Property Owners Association lists Nebraska at No. 64 for the number of United States patents issued in 2021. It marks the university’s fifth-straight year on the list and a climb from No. 77 in 2020. 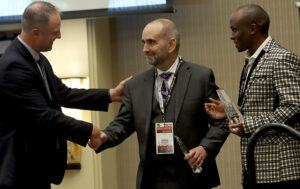 During the 2022 Innovation Awards ceremony on Thursday, Oct. 13, 2022, at the Hilton Omaha, UNeMed President & CEO Michael Dixon, PhD, (left) presents UNMC researchers Howard Gendelman, MD, (center) and Benson Edagwa, PhD, with the Startup of the Year award in recognition of the recent success of Exavir Therapeutics, a company they co-founded based on the antiretroviral therapeutics they’ve developed at UNMC.

“UNMC’s mission is to create a healthier future for our state, our country and our world,” said Chancellor Jeffrey P. Gold, MD. “Our researchers’ and clinicians’ efforts are key in achieving that goal. This rapidly growing continuum of science and clinical care is a critical part of the economic development part of our mission. This ranking is an indication of their dedication, as well as that of their colleagues and collaborators through the University of Nebraska, and we take pride in their successes.”

The ranking includes patents granted in 2021 by the U.S. Patent and Trademark Office to the University’s technology transfer offices—UNeMed at UNMC and UNO, and NUtech Ventures in Lincoln.

In the last calendar year, UNeMed secured 28 patents for UNMC and UNO innovations—of which, an incredible 22 have been licensed for further development.

“In the biomedical space patents are an essential element because development often requires millions or billions of dollars before the product can be sold and have an impact on healthcare,” said UNeMed CEO and president, Michael Dixon, PhD.  “We’re incredibly proud to see Nebraska climbing the ranks on this list because I think it is a reflection of all our efforts to bring these Nebraska innovations to the people who need them most.”

UNeMed uses patents as one way to protect the innovations of UNMC and UNO faculty, staff and students. Patents are critical to attracting the interest and support of corporate partners to fund additional development and commercialization. Corporate partners are often startup companies that create jobs, products and tax revenue for the local economy.

Among the 28 patents, six were licensed to the surgical robotics startup, Virtual Incision Corporation. 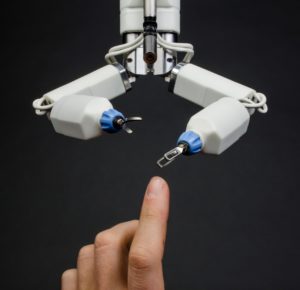 UNeMed manages the intellectual property portfolio for Virtual Incision, which was co-founded by Shane Farritor, PhD, an engineering professor in Lincoln and former UNMC surgeon, Dmitry Oleynikov, MD. For nearly 20 years, they have been developing the surgical robot known as MIRA, short for “miniaturized in vivo robotic assistant.” The company has received more than $100 million in venture capital investment since its founding in 2006.

The project recently received $100,000 from NASA to prepare the surgical robot for a 2024 test aboard the International Space Station.

Three patents were related to the work of UNMC inventors Howard Gendelman, MD, and Benson Edagwa, PhD, and their ultra-long acting therapies for HIV. Early testing shows the technology has potential to transform HIV treatments into a single dose given once or twice per year. Current treatment regimens often involve a strict schedule of daily doses.

A new startup, Exavir, was built around the technology, and recently secured $4 million from investors, including AlleyCorp and Gilead Sciences. UNeMed named Exavir the Startup of the Year during the 2022 Innovation Awards on Oct. 13.

A key patent out of UNO includes a self-pacing treadmill that is poised to disrupt the fitness industry. The device responds to a runner’s pace with no other inputs, decreasing speed as the runner slows from a jog to a walk, or increasing speed as a user begins to run. The self-pacing treadmill was UNeMed’s 2021 Most Promising New Invention and was licensed to a startup company called Impower Health.

Another UNMC patent related to a nutraceutical compound called Creatine HCI, was licensed to Vireo Systems and has become its centerpiece product. Based in Plattsmouth, Vireo recently announced plans for a $20 million expansion that could add 300 new jobs to the area.

A look at all patents UNeMed secured in 2021. Patent titles are followed by issue date, patent number and inventor names.