OMAHA, Neb. (Nov. 5, 2013)—A University of Nebraska Medical Center ophthalmology research team is partnering with a Chinese university and hospital in a study aimed at improving understanding of glaucoma, the leading cause of irreversible blindness in the United States and worldwide.

The UNMC work is being led by Carol Toris, Ph.D., professor of ophthalmology & visual sciences, and Shan Fan, M.D., assistant professor. They are partnering with Tao Guo, M.D., a researcher with Tongji University and Tenth People’s Hospital in Shanghai.

The study is looking at aqueous humor dynamics and the role it plays in glaucoma. More than 60 million people in the world are living with glaucoma. It’s estimated that more than 80 million people will develop glaucoma by 2020. 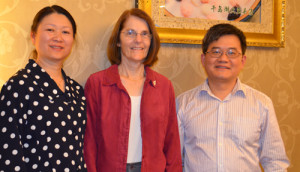 Considered one of the leading experts in the world on aqueous humor dynamics, Dr. Toris and her UNMC research team has already studied healthy Caucasian adults, an ethnic group that is prone to a certain type of glaucoma.

Now in collaboration with Tenth People’s Hospital, they are measuring fluid flow in the eyes of healthy Chinese adults, an ethnic group that is prone to a different kind of glaucoma.

The team will compare data to identify differences that may help explain why people may get a particular kind of glaucoma. It is hoped that these findings could help determine the best treatments for the particular type of glaucoma.

“With a population of 1.35 billion, China is a fertile environment for finding research subjects,” said Quan Dong Nguyen, M.D., chairman of ophthalmology and visual sciences and director of the Truhlsen Eye Institute at UNMC. “It’s a great collaboration. To have all these patients studied on Chinese soil is indicative of how well the project is going.”

In the next two years, Dr. Nguyen said the Truhlsen Eye Institute hopes to combine forces on several other projects with Tongji University and Tenth People’s Hospital.

These projects include several areas of significant concern for visual loss such as age-related macular degeneration, diabetic retinopathy, uveitis and ocular inflammation.

Through world-class research and patient care, UNMC generates breakthroughs that make life better for people throughout Nebraska and beyond. Its education programs train more health professionals than any other institution in the state. Learn more at unmc.edu and follow us on social media.

One Response to UNMC partners with Chinese university, hospital for glaucoma study