OMAHA, Neb. (Oct. 9, 2015)—A University of Nebraska Medical Center research team has been awarded a five-year, $8.8 million grant from the National Institute on Drugs of Abuse-National Institutes of Health for their work on HIV/AIDS treatment and eradication.

The goal of the research is to develop a long-acting antiretroviral therapy that could be taken once every six months to provide chemical viral eradication. The work, if realized, could represent a major breakthrough for HIV/AIDS patients, who currently have to take one pill each day. 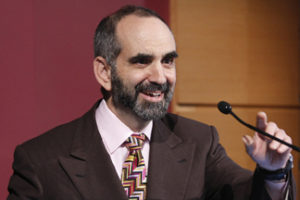 Antiretroviral therapy (ART) has revolutionized HIV treatment, he said. Drugs are combined that attack the virus at different stages of its reproductive cycle. ART doesn’t cure HIV, but it stops it from spreading.

The goal of ART is to get the viral load in the blood stream so low that tests can’t even detect it. HIV is still there, but there’s not enough of it to cause symptoms – as long as patients keep taking their medications.

“Dr. Gendelman continues to drive the science to improve ART therapy,” said Jennifer Larsen, M.D., vice chancellor for research. “This most recent grant is a testament to both his previous work and his vision of where the science should be going. I share his excitement that the research holds great promise for creating better therapies for patients.”

Working with two major pharmaceutical companies, the UNMC scientists have packaged antiretrovirals into targeted nanoparticles, which can improve drug biodistribution and target sites where the virus hides.

A prime directive for the work is to bring the drug to sites where the virus hides and to combine ART with other medicines that work to destroy whatever virus remains in the body.

“It’s a sort of seek and destroy mission for the research,” said Dr. Gendelman, who noted that preliminary test results in animal models have been promising.

He said the long-term goal of the research is to enable a new product. Under development is a nanomedicine good manufacturing facility, on the UNMC campus, which would develop formulations for phase I clinical testing.

“Because of the success of Dr. Gendelman’s research team, we have established a nanomedicine pre-production plant and by next spring will have a GMP nanoproduction facility operational,” said Deb Thomas, interim vice chancellor for business and finance.  “Knowing this team as I do, it’s just the start where the best is yet to come.”

Dr. Gendelman’s research team has exceeded $20 million in active funding largely focused on nanomedicines. Since 2010, the combined research efforts of the research team have led to 10 other grants totaling more than $12 million.

The research brings together a highly integrative, cross-disciplinary team of scientists, including researchers at the Scripps Research Institute. The UNMC team members include:

College of Medicine – Department of Radiology

College of Medicine – Department of Pharmacology and Experimental Neuroscience

What others are saying:

“It has been a pleasure collaborating with Howard in the early days where we worked together to establish the feasibility of targeting nanoparticle antiretroviral injectables. I find it simply amazing to see how far he has taken it toward a practical treatment for overcoming treatment compliance. It is very gratifying as well to see that this opinion is shared by the NIH.”

“Howard is a good friend and an excellent scientist.  He is inquisitive and works hard. He has become expert in the area of nanoformulated therapies. He has leveraged this knowledge toward HIV to accept the therapeutic challenge of producing long acting, cell targeted antiretrovirals. Howard understands HIV and its effects on the immune system, and he applies his knowledge practically to answer important scientific questions. He’s quite a remarkable person and scientist.”

“The work of Dr. Gendelman’s group has the potential to revolutionize the treatment and prevention of HIV infection. Howie has always been one of the country’s most innovative thinkers in HIV pathogenesis and treatment, and this award will provide stable support to continue his research. The environment at UNMC is ideal for supporting development of the type of long-acting, injectable drugs this group is proposing.”