Collaborations and Their Impact on Inventions and Patents 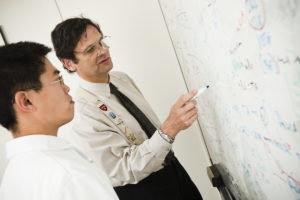 Collaborations are an essential part of the research process.

An essential part of the research process is collaboration. As the reader is well aware, today’s most important solutions often involve complex systems which require the expertise of multiple parties to fully address. Take, for example, the sequencing of the human genome, completed (mostly) in 2003. The story of the Human Genome Project (HGP) is well-described elsewhere, but those familiar with the history of the HGP will recognize that it was supported by a long line of luminaries – both in academia and in industry – specializing in fields such as chemistry, biology, physics, engineering, computer science, and mathematics.

Many research projects, even if less ambitious in scope than the HGP, are not so different. At UNeMed, for example, we regularly foster collaboration between faculty at UNMC and engineers at UNL to develop innovative medical devices and software packages. Collaborations need not merely be an exchange of expertise, however. They can also involve an exchange of resources or tools. A researcher located here at UNMC, for example, may have identified a potential therapeutic target for a drug, but lacks the compound library necessary to identify a drug candidate. It is perfectly reasonable for that researcher to collaborate with an outside partner who has a compound library ready to be screened for potential hits.

While collaborations of this type occur on a regular basis, they do have interesting implications for the commercialization process. In this blog entry, I would like to take a few minutes to describe how collaborative research impacts the intellectual property rights to an invention that comes out of the collaboration. Furthermore I will discuss how UNMC – by way of UNeMed – handles the commercialization of collaborative technologies, both in the cases of academic-academic and academic-industry pairings.

Under 35 U.S.C. § 116, a patent is co-owned by each inventor of the invention claimed in the patent. Thus, if the claimed invention was invented in collaboration with multiple parties, the resulting patent will be co-owned by each party. This can lead to a number of issues which, if not addressed ab initio, can fester into more serious complications down the road.

First, a key point to consider is that, to be an inventor (and thus co-owner) on a patent, a party must have contributed to the conception of a claim found in the patent. Because the scope and nature of patent claims are often modified during the course of patent prosecution, it is common that collaborators – who may have initially been considered inventors at the time of the patent application – are subsequently eliminated from the inventor/ownership pool by the time the patent is issued. The problems this can cause within the collaboration are obvious.

The second problem with co-ownership of a patent is that, similar to personal property interests, a co-owner of a patent has a “50% undivided share” (if two co-owners) of the property rights. Co-owners to property have a number of rights in the property, but the most important for our purposes is an unrestricted right of access to it. This can make commercializing the patent difficult, because the value of a patent is greatly diminished if it does not provide exclusivity.

Take, for example, the following situation: a UNMC researcher co-invents a patentable invention with a collaborator. A few years later, the patent is subsequently issued with UNMC and the collaborator as co-owners. Nevertheless, the invention still requires significant investment (e.g. 510(k), IND, etc.) to develop it to the point where it can be sold as a product or otherwise be utilized in the public interest. UNeMed wants to license UNMC’s rights in the patent to an industrial partner to further develop the invention, but the collaborator does not wish to license the patent. Instead, the collaborator wants to hold on to the patent and build a company around it himself (UNeMed is not keen on this idea, as – for purposes of this hypothetical – the collaborator is a wildly inexperienced businessman).

This is clearly a worst-case scenario, but it is illustrative of the problems that can occur when co-ownership rights in a patent are not addressed ahead of time. So how are these issues resolved? Generally, most research collaborations by UNMC faculty are of two types: academic-academic (including other non-profits) and academic-industry. Based on the interests and commercialization capabilities of the collaborating entity, the nature of the solution may change based on which type of collaboration has occurred.

When the collaborating party is another academic institution, it is typical for the institutions to put in place an Inter-Institutional Agreement (“IIA”) once an invention is generated. The IIA contractually outlines each party’s rights in the co-owned intellectual property. For example, the common IIA will consolidate patent rights and establish which entity is responsible for marketing and prosecuting the patent. It will also determine what the distribution of proceeds will be if a licensee is found (typically the institution which is taking the lead takes a higher percentage of proceeds). In circumstances where UNeMed does not take the lead on patent prosecution, provisions are included in the agreement giving UNeMed rights to oversee the prosecution of the patent such that UNMC’s rights in the patent are not inequitably terminated in the course of prosecution.

This agreement is different when a UNMC researcher has collaborated with an industry researcher. Generally, in these circumstances, the company is interested in pursuing the invention – why else would their researcher be working on it – and therefore it is simply a matter of licensing (or giving an option to) UNeMed’s rights in the co-owned patent. Conversely to an IIA, in an academic-industry collaboration contractual agreements overseeing the patent rights are put in place before the intellectual property is generated. Moreover, in these circumstances, UNeMed generally retains control, subject to the company’s input, of patent prosecution as well.

UNeMed is here to help

If not handled properly, collaborations have the potential to be painful experiences for researchers interested in commercializing their intellectual property. Fortunately, with a little foresight, nearly every major hurdle to the commercialization process can be anticipated and addressed with the help of UNeMed. If you are currently engaged in (or are contemplating in engaging in) a research collaboration with an outside entity that may produce commercializable intellectual property, please do not hesitate to give us a call – we’re happy to help in any way we can. Here, of all places, we should realize that an ounce of prevention is worth a pound of cure.

Please leave any questions or suggestions you may have in the comment section below.

You can also shoot me an email at bill.hadley@unmc.edu

Blog Collaborations and Their Impact on Inventions and Patents

One Response to Collaborations and Their Impact on Inventions and Patents