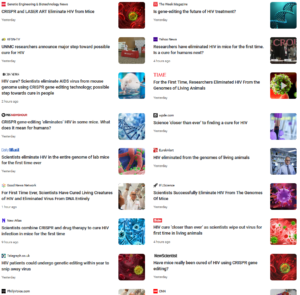 It’s easy to get excited when one of our researchers scores interesting results from an experiment. When those results then lead to a prestigious publication, it gets even more tempting to start shouting from the rooftops.

Still, we try to temper our enthusiasm as best we can because a lot of the technologies we see are still years away from reaching the clinic.

Then, yesterday, Howard Gendelman, M.D., stood before news cameras and told those gathered about his most recent publication in Nature Communications.

He knocked everyone’s socks off.

Along with his team and partners at Temple University, Dr. Gendelmen showed with his LASER ART technology that curing HIV might not just be possible, but perhaps even likely. That’s a thought that felt more like a fantasy two days ago.

As you might imagine, the news blew up across the internet and airwaves. Here’s a smattering of some of the news outlets that picked up the story. The original UNMC and Temple joint press release can be viewed here.