Antimicrobial peptide work goes on with $1.8 million from NIH

OMAHA, Neb. (March 17, 2015)—Engineered peptides may soon be the therapy of choice against nasty bacterial and viral infections, as well as cancer and HIV.

Guangshun (Gus) Wang, Ph.D., assistant professor, pathology/microbiology, received a five-year, $1.88 million RO1 grant from the National Institute of Allergy and Infectious Diseases (NIAID), a division of the National Institutes of Health (NIH), to extract the most critical parameters and design and optimize potent antimicrobial peptides, basically, templates for a new generation of antimicrobials.

He’s going after the life-threatening “superbugs” that have the ability to escape the killing power of traditional antibiotics. The ESKAPE pathogens are Enterococcus faecium, Staphylococcus aureus, Klebsiella pneumoniae, Acinetobacter baumanii, Pseudomonas aeruginosa and the Enterobacter species. 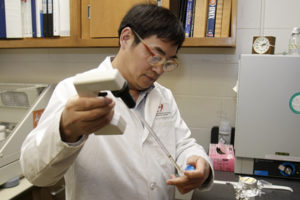 Peptides are naturally occurring tiny proteins that present a vast improvement over traditional antibiotic medications in that bacteria are far less likely to develop resistance to treatment.

“This is an exciting time especially since the pipeline for novel therapeutics to treat drug-resistant infections is dry. This is a novel way to approach this problem,” Dr. Wang said.

His work began to be noticed in 2004 when he went live with his massive peptide database, which now contains more than 2,500 peptides from a wide variety of sources, from human, animal and insect to fungi, fish and plant.

The Antimicrobial Peptide Database (APD) facilitates naming, classification, statistical analysis, search, prediction and design of novel antimicrobials with desired properties. It is the most comprehensive in the world, has received more than two million web hits and has been cited in more than 700 journal articles and patents.

With this NIAID grant, Dr. Wang has expanded his laboratory capabilities to test cytotoxicity in human cell lines and in vivo efficacy in animal models and is designing new compounds for UNMC’s center for Staphylococcal research.

Two years ago, Japan-based Taisho Pharmaceutical Company contracted Dr. Wang to make a new set of peptides to kill a particular bacterium that can only be treated now by one drug that has bad side effects, said Joe Runge, J.D., senior licensing specialist, UNeMed Corporation, the technology transfer and commercialization arm of UNMC.

“This is a new paradigm of peptide intervention,” he said. “More peptides will eventually become drugs. Dr. Wang uses information in his database and leverages his expertise to custom make peptides. It’s a perfect example of direct and applied biotechnology.

“He’s at a point in his career where he can do amazing things,” Runge said.

News Antimicrobial peptide work goes on with $1.8 million from NIH