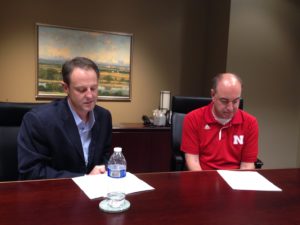 UNeMed President Michael Dixon (left) looks over his notes during his halftime interview with Greg Sharpe (right), which was broadcast Saturday night during Nebraska’s 38-17 win over Northwestern.

LINCOLN, Neb. (Oct. 18, 2014)—UNeMed president and CEO Michael Dixon and the interim president of the University of Nebraska, Jim Linder, were featured guests during the halftime intermission of Nebraska’s 38-17 victory over Northwestern University.

Linder, a regular feature of all Nebraska football game broadcasts, brought in Dixon to discuss the value of tech transfer and commercialization efforts at the University, and how they impact the local economy.

“In the past three years, we’ve helped create eight startup companies that have raised more than $10 million to help support technology development,” Dixon told Greg Sharpe during the pre-recorded interview. “Our activity, along with startup support groups like NMotion, Straight Shot, PIPELINE, and Silicon Prairie News has organizations like CNN Money declaring Omaha as one of the top startup hubs in the nation.”

The interview was broadcast by the Husker Sports Network, carried locally by KFAB (1110 AM) in Omaha. Linder’s series of halftime interviews continues this week, when he brings in Sam Meisels, the executive director of the Buffett Early Childhood Institute. Nebraska will host Big Ten newcomer Rutgers. Kickoff is listed at 11 a.m.