Dixon testifies for University of Nebraska at House committee 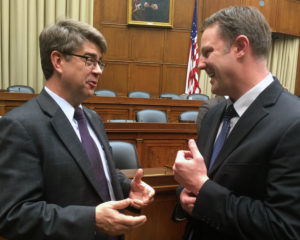 “Any action must preserve patent rights,” Dixon told the committee, which is chaired by Nebraska U.S. Rep. Lee Terry.

Terry called the hearing to examine the issue of patent demand letters, a common practice abused by some patent assertion entities, or PAEs. Everyone who spoke during the hearing unanimously decried the deceptive practice, citing as the principle problems: The general lack of clear details in demand letters, a lack of federal guidelines and no clear definition of local or state jurisdiction.

Terry said he and the committee wanted to hear from expert witnesses as the committee contemplates drafting a bill that would “itemize or prescribe what should be in a demand letter.”

Unscrupulous PAEs, commonly called “patent trolls,” build a stockpile of patents by purchasing them from inventors and other intellectual property owners. The patent trolls then pursue claims of infringement against all manner of businesses, often targeting small or new businesses because they are too scared, too inexperienced or just can’t afford to defend themselves.

Removing the vague demand letter from their toolbox would be a major blow to patent trolls, said Dixon, president at UNeMed, the technology commercialization office for the University of Nebraska Medical Center.

“Reduce the ambiguity of demand letters,” Dixon said, “and you’ll reduce the power of patent trolls.”

Sent by the thousands to small businesses, vague demand letters threaten legal action for patent infringement. The letters often do not refer to a specific patent or even how the business infringed a patent, which leads some businesses to pay for a license just to avoid the greater expense of lawyer fees.

“This bottom-feeder model is premised on the idea that they don’t have to be specific,” said Jason Schultz, an associate professor of clinical law at New York University who also testified before the committee. “…just pay to get it out of the way, which so many are doing.”

News Dixon testifies for University of Nebraska at House committee