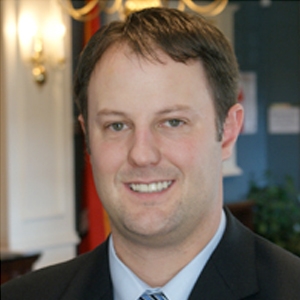 OMAHA, Neb. (April 28, 2009)—UNeMed Corporation, the for-profit technology transfer arm for UNMC, will have a new president as of May 1. Michael Dixon, Ph.D., director of the intellectual property office, was named last week to the position by the UNeMed Board, chaired by Don Leuenberger, vice chancellor of business and finance. James Linder, M.D., current president and CEO of UNeMed, was then named CEO.

“Michael brings to the position a unique understanding of both science and intellectual property,” Dr. Linder said. “He’s become nationally recognized in key groups, such as the Association for University Technology Managers and the Licensing Executive Society.”

Dr. Dixon, 33, has successfully mixed science and business since he received his doctorate degree in molecular biology from the UNMC Eppley Cancer Center in 2003. At that time, he became the faculty liaison/technology transfer associate in the Intellectual Property Office (IPO), becoming director in 2006.

In that year, IPO and UNeMed merged and Dr. Dixon remained director of the office until he was named vice president and chief operating officer of UNeMed in January 2008.

As CEO, Dr. Linder will be involved in, business development outreach to external partners and venture capital development. Dr. Dixon said he is proud of the significant increase in technology transfer activity on campus.

“In the past three years, we’ve seen more than a 50 percent increase in licenses and inventions going through UNeMed,” he said. “Our staff has been able to keep up with the pace and increase our efficiency to become a valuable resource for the campus.”

Moving UNMC technologies from the bench to the marketplace to help people is rewarding for Dr. Dixon.

“I want to continue to build on the successes of Dr. Linder, who developed the commercial side to UNeMed, and Tom McDonald, Ph.D., who led UNeMed before him as one of first entrepreneurs on campus,” he said.

One of his long-term goals is to bring in as much research money to UNMC as the tobacco settlement provides — $5 million to$6 million a year.

Dr. Dixon points to other technologies that will help build the research revenue stream: