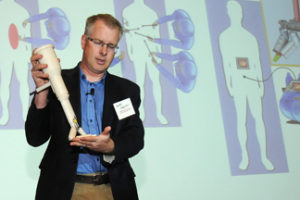 Inventions displayed spanned a wide array of biomedical development that ranged from small surgical robots and nanoparticles to next generation antibiotics and innovative research tools.

Hosted by UNeMed Corporation, the event was part of Innovation Week, an annual showcase of UNMC research discoveries and developments. Innovation Week continued Tuesday with a special seminar from GlaxoSmithKline Director of HIV Medicinal Chemistry Brian Johns, Ph.D., who delivered a talk about the development and discovery of Tivicay — a powerful new HIV treatment that recently earned FDA approval. Innovation Week concludes Thursday at the Innovation Awards Ceremony and Reception.

“I would say about 90 percent of them weren’t from UNMC, which is what we wanted,” UNeMed President and CEO Michael Dixon said after. “We wanted to give the community a chance to put their hands on the world-class research here. It belongs to them.”

Virtual Incision co-founder Shane Farritor — the University of Nebraska-Lincoln engineer who is partnered with UNMC researcher Dmitry Oleynikov — opened the slate of presentations with a demonstration on a surgical device designed to improve surgeries that remove part of the large intestine.

Farritor said current techniques and tools are often performed through small incisions, or laparoscopically. But those tools can be counter-intuitive and difficult to use.

“I couldn’t tie my shoes with laparoscopic tools, but I could with this,” he said.

The afternoon concluded with a presentation from Dave Saunders, the vice president of product development at Trak Surgical. Saunders also presented a surgical tool, a hand-held bone saw for joint replacement surgeries that could revolutionize the procedure.

Current knee replacement operations require a surgeon to prepare the joint by screwing guides, or jigs, on the patient’s bones by drilling several holes. Saunders compared the jigs to a carpentry set that resembled something “inspired by the Spanish Inquisition.”

Designed by a team led by UNMC’s Hani Haider, the saw eliminates entirely the need for jigs with an integrated guidance system that helps surgeons make even more precise cuts.

The crowd also saw presentations from Motometrix, which can detect concussion’s just by the nearly imperceptible changes in a person’s balance; Elegant Instruments, a startup built by two graduate students who devised a better tool for research lab technicians; Prommune, a company built on Sam Sanderson’s promising next generation antibacterial; ProTransit Nanotherapy, which plans to deliver powerful anti-skin cancer agents with nanoparticles; Cardiosys, a data analysis platform with predictive capabilities; and Radux, a device company that makes products to protect physicians from radiation as they work on patients while undergoing x-rays.

Presentations can be viewed here.