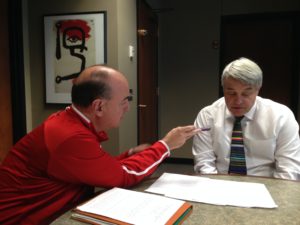 Greg Sharpe (left) and interim president of the University of Nebraska Jim Linder chat about the value of the University to the state during a pre-recorded interview that aired during the Nebraska-Iowa football game last week.

Shortly before Nebraska completed its 17-point comeback in a 37-34 overtime win over Big 10 rival Iowa, Linder chatted for five minutes with the “Voice of the Huskers,” Greg Sharpe, the Husker Sports Network’s prime broadcast play-caller since 2008.

Linder told Sharpe that the University helps drive the state economy by pushing innovations to the marketplace. He used UNeMed as an example, noting the more than 400 new UNMC inventions at UNMC in the last five years.

“More important than numbers are the new products that could change lives: New therapies for diabetes, cancer, Parkinson’s.” Linder said.

Linder has been a regular feature during all radio broadcasts of Nebraska football games, and wrapped the regular season Friday in an interview that demonstrated the whole value of the University to the state. The interview revisited several subjects touched on in previous weeks, including the work performed by healthcare providers at the University of Nebraska Medical Center in their high-profile battles against Ebola.

“I’m proud of the commitment of our physicians and staff at UNMC and TNMC for their work in caring for Ebola patients,” Linder said during the pre-recorded interview, adding that UNMC is now “a national model for Ebola care.”

Linder, who led UNeMed from 2006-2011, also talked about the Fred and Pamela Buffet Cancer Center, the University’s booming enrollment, and the Innovation Campus’ focus on food, fuel and water.