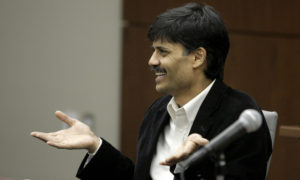 Channabasavaiah Gurumurthy, Ph.D., talks about the future of genome editing and the CRISPR/Cas9 tool during a panel discussion Tuesday at UNMC.

The day began with a panel discussion about the CRISPR/Cas9 gene-editing tool. UNMC researcher Channabasavaiah Gurumurthy, Ph.D., and patent attorney Bill Adolfsen, Ph.D., discussed potential intellectual property issues related to discoveries and innovations resulting from the CRISPR technology. They talked about how rapidly the field of gene editing has grown in just the last five years, and how much more it might evolve in the future.

Dr. Gurumurthy, the Director of the UNMC Mouse Genome Engineering Core Facility, is a co-inventor of Easi-CRISPR, a new technology that complements CRISPR’s ground-breaking ability to snip DNA. Easi-CRISPR is a proprietary protocol that allows for the easy insertion of new material into the genetic code. 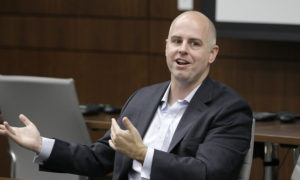 Bill Adolfsen, Ph.D., is seen here during the panel discussion Tuesday at UNMC.

Dr. Adolfsen is a registered patent attorney and an associate at Andrus Intellectual Property Law.

UNeMed offered the workshop because industry researchers don’t often publish their results in academic and scientific journals. Instead, they first publish in the form of patent applications, which won’t show up in PubMed or other academic searches.

Both events were held at the Yanney Conference Center, located on the ground floor of the Fred and Pamela Buffett Cancer Center. On Monday, UNeMed hosted a Kickoff event where staffers gave away free T-shirts, first-aid kits and other goodies. 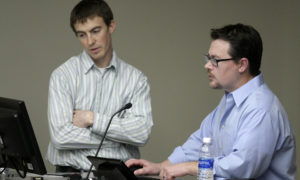 Three events remain for Innovation Week, including a luncheon this afternoon that celebrates Nebraska women in STEM, or science, technology, engineering and math. The luncheon begins at noon at the Quarry Oaks Golf Club in Ashland, Neb.

On Thursday, Oct. 26, UNeMed will host the Research Innovation Awards Banquet in the Truhlsen Campus Events Center, located in the Michal F. Sorrell Center on the corner of 42nd and Emile Streets. The awards recognize inventive faculty, students and staff at UNO and UNMC, rewarding the achievements of those who submitted a new invention, received a U.S. patent or licensed a technology during the previous fiscal year.

UNMC and UNO Chancellor Jeffrey Gold, M.D., is also expected to be on hand to present awards to inventors, including the 2017 Emerging Inventor of the year and the 2017 Most Promising New Invention.

The Awards Banquet begins at 5 p.m. and is invitation-only. Contact UNeMed to request an invitation.

Innovation Week wraps up Friday, Oct. 27, in the Yanney Conference Center at 11:30 a.m. when UNeMed hosts a panel discussion about alternate career paths for research scientists in biomedical fields. 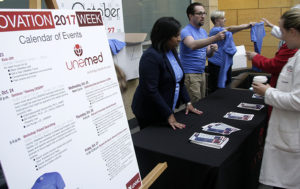 Panelists will include former research scientists who now work in a range of science-related fields. They are expected to discuss their personal journeys as biomedical scientists, how they arrived in their present occupations, and offer advice to others who may be interested in a science career away from the research bench.

The first 50 guests will receive a free lunch, and other freebies will be given away to those who ask questions and engage the panel in a meaningful way.