*Editor’s Note: Before we got too deep into 2015, we wanted to scan through our pipeline for a few highlights that have the greatest potential to make headlines this year. Most of our technologies are still in early stages of development, so we have to work hard to stow our excitement about all the potential they hold. Other technologies are closer, but still aren’t quite ready for prime time—Yet. But here are a few things that are really close. Things we hope to tell the world a lot more about before the end of 2015.

COPD detection: Is there an app for that? 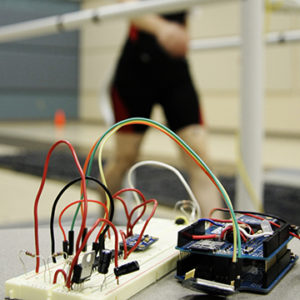 disease (COPD) detector in the largest ongoing clinical study of COPD exacerbation. The University of Nebraska at Omaha’s Jenna Yentes, Ph.D., designed the device to detect signs of COPD, the narrowing or destruction of lung tissue. The device measures the relationship of a user’s walking and breathing patterns or biorhythms. Using these biorhythms, the user can be alerted to early signs of exacerbation, the flare-up of symptoms that speeds up the destruction of lung tissue.

A blood test for the heart 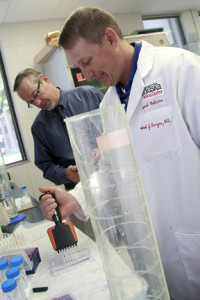 A team of collaborators are working on an international study to further prove and validate the authenticity of a blood test as a viable assessment of the risk of heart attacks. A molecule found in a person’s blood may signal an important distinction between coronary artery disease and heart attacks. A simple, inexpensive blood test could determine the presence of the molecule, malondialdehyde-acetaldehyde or MAA, -indicating a higher risk of heart attacks. The discovery of the molecule could alert patients to their risk level before they become susceptible. The inventors are also analyzing the biology of MAA for an even more precise test. 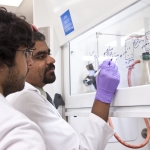 Amarnath Natarajan, Ph.D., received a University of Nebraska Proof of Concept grant to further his research on “13-197,” a pancreatic cancer drug. Pancreatic cancer is the most lethal form of cancer with roughly 45,000 diagnosed people a year. About 43,000 of them will die within five years of diagnosis. Existing treatments, when successful, only last a certain amount of time before a patient develops resistance to treatment. “13-197” has shown promise in tests with few side effects. Using the grant, Dr. Natarajan hopes to develop new and improved analogs of 13-197 to improve its potency and effectiveness.

UNeMed is working with industry experts to design an advanced prototype of a portable laparoscopic simulator for FDA testing to simulate advanced surgical models but in a low-cost, low-tech environment. The portable laparoscopic training simulator can be used virtually anywhere, making the training for minimally invasive surgery that much easier. The simulator eliminates the space and equipment requirements of a typical laparoscopic setup, making nearly any space a usable training spot at a fraction of the cost. Included software will provide feedback to surgeons so they can better understand areas in need of improvement.

Radux Devices is working on FDA approval and distribution on two technologies focused on safety and efficiency during surgeries that require X-ray imaging. In the summer of 2014, Radux received from the University of Nebraska a proof of concept grant that funded additional tests that hope to prove the reduced risk of radiation to the hands of physicians during surgery and improved workflow. The first product, the ARRESS (attachable radiation reduction extension support sheath,) is an extension sheath that keeps physicians farther from the radiation field and improves workflow. The second product, the Lock-Block, is a portable radiation shield that connects to the sheath extender.

UNeMed is in the process of putting together a program that will nurture and support early-stage biotech startups. Similar to other incubator programs across the country, UNeMed’s incubator will bring together as many resources as possible into one physical space so that UNMC-borne technologies and startups have all the tools and resources needed to succeed. A more detailed announcement hopefully will come soon, but the incubator could include a physical lab space on UNMC’s campus, providing a new company with rare access to all the facilities, expert faculty, skilled staff and other resources such as mentors, advisers and potential collaborators.