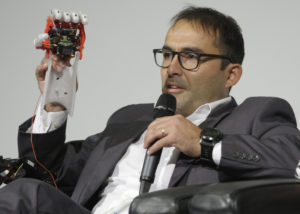 OMAHA, Neb. (April 17, 2018)—Tyler Scherr, Ph.D., a licensing associate at UNeMed, and Jorge Zuniga, Ph.D., a biomechanics expert at the University of Nebraska at Omaha’s biomechanics department, anchored a recent three-person panel on a local news program, “Consider This.”

The episode aired on Nebraska’s PBS affiliate, NET, and focused entirely on the marvels of 3D printing or additive manufacturing. The program covered a brief history of 3D printing and examined some of its wider applications before diving into current and even future applications.

Before joining UNeMed, Dr. Scherr played a large role in bringing 3D printing to the University of Nebraska Medical Center. While pursuing his doctorate in biomedical research, he co-founded UNMC’s 3D Maker’s Club.

Dr. Zuniga has gained international notoriety for his work creating affordable prosthetic limbs for children. His innovative use of 3D printing has made prosthetic devices accessible to countless children throughout the world. Much of his work is “open sourced” through his philanthropic project, Cyborg Beast. Many of his products—3D printing files—are largely available to anyone at little or no cost.

James Pierce, a graduate assistant in Dr. Zuniga’s lab, was also on the panel. Pierce is the co-founder of one of Omaha’s first 3D printing ventures, Kül 3D. Cathy Wyatt hosted the program.

“Consider This” is a half-hour weekly program produced by UNO Televeision and the UNO College of Communication, Fine Arts and Media.

Watch the entire episode here or follow this link: http://netnebraska.org/media/media.php?bin=NET&vidgroup=50005871