OMAHA, Neb. (Oct. 21, 2014)—Attendees got a look at some of the innovative technologies developed in the labs at the University of Nebraska Medical Center during UNeMed’s Technology Demonstration Day Tuesday afternoon.

Demo Day, part of UNeMed’s Innovation Week, featured six technologies presented to an estimated audience of 70. The new technologies are either the foundation of a new startup company, are licensed to an existing company, or are under negotiations for a licensing deal. (Videos of the presentations can be viewed here.) 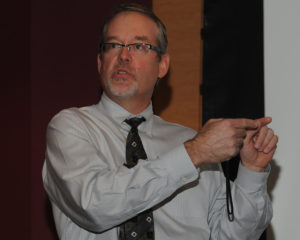 Dan Anderson, M.D., Ph.D., kicked-off the event by presenting a new biomarker that could be used to create a new blood test. Under development at UNMC, the blood test could help flag people who are candidates for serious heart trouble even when other tests say otherwise.

Seventy percent of people at the age of 40 have coronary artery disease. But it doesn’t always develop into a fatal condition. A blood test using the biomarker—malondialdehyde-acetaldehyde adduct, or MAA for short—could help care providers tell the difference, Anderson said.

“It’s a failure of medicine to die from a heart attack at 40,” Dr. Anderson said.

With a simple blood test, doctors can analyze a patient’s blood and look for a ratio of MAA antibodies. Similar ratios could also be link with other inflammatory diseases, Anderson said. 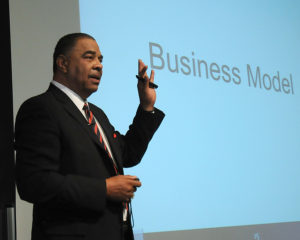 Ron Allen, CEO of Chrysalis, presented a new catheter designed to reduce risk for patients who undergo the process that filters a patient’s blood, hemodialysis.

Two million people are on hemodialysis, a necessary treatment for patients with failing kidneys that takes three hours, three times a week. For most patients, they either take the treatment or die.

“There are no positive alternatives,” Allen said, adding the only other option is no treatment at all.

Blood flow in the catheter can become blocked, requiring surgery and radiological imaging to verify the repair. When a catheter does need to be replaced, the entire procedure can cost up to $18,000. The new catheter, an elegantly simple design by UNMC’s Marius Florescu, M.D., reduces the number of times a catheter needs to be replaced. Dr. Florescu incorporated a small balloon into the tip of the catheter that can be inflated to disrupt the blockage and eliminate the need for additional procedures and costs. 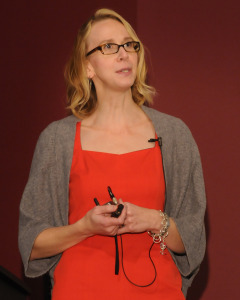 Jenna Yentes, Ph.D., presented a new method developed by UNO’s Nick Stergiou that can detects the deadly episode that come from narrowed or or destroyed tissue in the lungs—a condition known as chronic obstructive pulmonary disease, or COPD. The third leading cause of death in the United States, COPD is an unpredictable condition that creates sometimes deadly flare-ups or exacerbations that are impossible to diagnose.

Using a device attached to the chest and feet, the device takes measurements of walking and breathing and how the two biorhythms interact with one another.

This ratio of walking and breathing can alert the patient to early signs of exacerbation, the flare-up of symptoms that speeds the destruction of the lung. 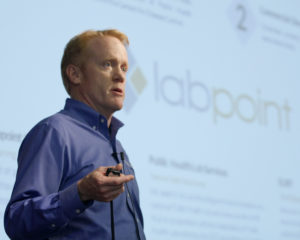 The system, called ELIRT, works by monitoring and transmitting data from one entity to another. The server is installed on the user’s computer and integrates with the user’s software. Once identified through filters, data can be shared externally. 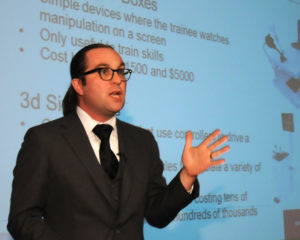 The new portable system renders usable nearly any open space for the simulator at a fraction of the cost, enabling surgeons or students to practice more often. The system can also rate or grade the user and show what areas they need to work on.

Matthew MacEwan, president of Acera Surgical, ended Demo Day with a presentation on a new design for surgical meshes for use in brain surgery. 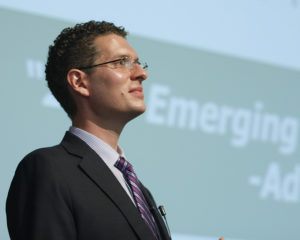 The surgical mesh, CeraFix™ Dural Substitute, is the flagship product of Acera Surgical, and is paving the way for next generation surgical materials.

Surgical meshes are used to treat damaged tissue, but with a fail rate of 10-40 percent, it’s not the most economical treatment for patients or hospitals.

The CeraFix™ Dural Substitute is designed to promote more rapid cellularization of neuro tissue. It has a cloth-like feel and design, but is strong enough to treat damaged tissue before being resorbed. This cuts down on the costs to replace the surgical mesh in previous designs if it breaks or if the tissue doesn’t fully heal itself.

Innovation Week concludes Thursday, Oct. 23, with the Innovation Awards Ceremony and Reception in the DRC I Auditorium at 4 p.m.

One Response to Six new technologies featured at Demo Day 14