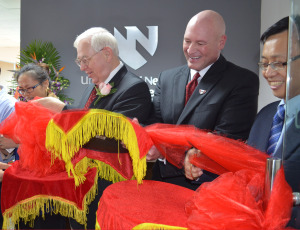 SHANGHAI, China (November 7, 2014)—The University of Nebraska Medical Center’s relationship with China formed a stronger bond with the official opening of a satellite office in the Shanghai Free Trade Zone.

A ribbon-cutting ceremony on Oct. 29 officially opened the door to deeper biomedical cooperation between UNMC and Chinese sectors in biomedical industry and healthcare education.

“Collaboration with China’s biomedical industry and higher education is really the essence of our strategy,” said D.J. Thayer, UNeMed’s Director of International and Domestic Business Affairs, who oversaw the creation of UNMC-China.

“This is taking what we do best, and combining it with what they do best,” Thayer said. “We’re good at a lot of things, but not everything. Everyone benefits from this. Nebraskans, Americans, the Chinese. Everyone.” 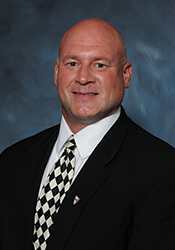 UNMC recently celebrated the 10th anniversary of its relationship with China, which has been based largely on educational exchange and research collaborations.

Opening a fully-staffed operation in Shanghai expands that relationship for greater collaborations with Chinese medical schools and hospitals. The new office opens a path to a wider range of possibilities for commercializing UNMC technologies and developing partnerships with industrial partners in China.

UNMC already has a long track record of successful student and faculty exchanges, as well as several UNMC inventions licensed to Chinese companies.

But UNMC will also expand its focus abroad to consulting with Chinese officials and developers who are increasingly trying to provide more Western-styled healthcare options. Already, UNMC-China is meeting with Chinese architectural and engineering firms on a $3 billion project that would create a massive health care facility for a piece of the growing medical tourism market.

UNMC-China is a subsidiary of UNeMed Corporation, the technology transfer and commercialization office for UNMC. UNMC-China is known officially as UNeMed Health Consulting Shanghai, or UHCS for short.

One Response to UNeMed opens office in Shanghai