UNMC and UNL researchers have been working since 2008 with the U.S. Army’s Joint Warfighter Medical Research Program to develop miniature robotic technology to enable surgeons to perform minimally invasive procedures for members of the military injured on the battlefield. 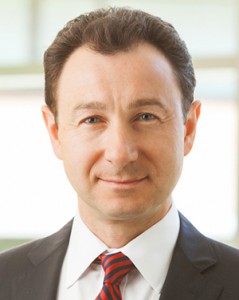 “The Army is very interested in delivering care to injured warfighters or other personnel in remote areas,” said Dmitry Oleynikov, M.D., director of the Center for Minimally Invasive Surgery and the Center for Advanced Surgical Technology at UNMC. “Right now the biggest thing that they have in their basket is to get the soldier out of the battlefield on a helicopter to where they can get care within the one hour. The idea behind the robots is to begin lifesaving measures on soldiers who can’t be transported out immediately.”

He said the mini robots have the capability to provide basic diagnosis and triage of internal injuries in war zones and other military environments. The robot can be inserted into the patient and be controlled by a surgeon in a remote location. The device would transmit live video images so surgeons could identify the trauma and serve as a “remote first responder.”

The surgery would be done via a tiny incision, through the mouth or another natural orifice, Dr. Oleynikov said, by surgeons far away. The person injured would be in a war zone or in a remote area where medical facilities aren’t immediately available.

“With the grant we’ll continue the successful work we’ve been doing,” Dr. Oleynikov said. “I think the grant and working with the Department of Defense is important. We’re doing some very exciting work as expertise in this surgery isn’t all that common.”

He said the technology ultimately may be applied in civilian settings and rural environments.

Dr. Farritor said he is excited about collaborating with UNMC. “We really think these robots can have a significant effect on health care and the way surgery is performed. We hope to do a clinical trial next year.”

Through world-class research and patient care, UNMC generates breakthroughs that make life better for people throughout Nebraska and beyond. Its education programs train more health professionals than any other institution in the state. Learn more at unmc.edu and follow us on social media.