The institute – called UNeTech – will be located at 3929 Harney St. in a building formerly occupied by the American Red Cross. 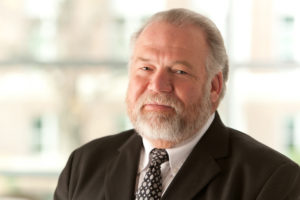 A longtime top administrator at UNMC, Rod Markin, M.D., Ph.D., will serve as executive director of UNeTech. Dr. Markin has been on the faculty for 30 years, serving most recently as chief technology officer and associate vice chancellor for business development.

In 2010-11, Dr. Markin served as interim dean of the UNMC College of Medicine. Prior to this, he was named the David T. Purtilo Distinguished Professor of Pathology in 2005 and senior associate dean for clinical affairs in the College of Medicine in 1997. He also served as president of UNMC Physicians, the physician practice group for UNMC, from 1997 to 2010.

Dr. Markin, who holds 35 patents, is one of the most prolific inventors at UNMC. In 2009, he received the Lifetime Achievement Award from UNeMed Corporation, UNMC’s technology transfer company, for his innovative work in transforming the clinical laboratory through technology.

Joe Runge will serve as associate director of UNeTech. Runge has been with UNeMed for the past 11 years, serving as business development manager and senior licensing specialist. UNeMed has been in operation for 25 years.

Scott Snyder, Ph.D., chief research officer, will serve as the lead administrator for UNO. He will be assisted by Nick Stergiou, Ph.D., Distinguished Community Research Chair in Biomechanics and director of UNO’s Biomechanics Research Building.

In addition to his role as chief research officer, Dr. Snyder is president of the Nebraska Applied Research Institute (NARI) on the UNO campus. Dr. Stergiou also oversees the National Center for Research in Human Movement Variability housed in the UNO Biomechanics Research Building.

“This is a very exciting opportunity for UNO to partner with UNMC, as we bring meaningful technologies from the research lab into the lives and care of people,” Dr. Snyder said.

“Biomechanics is committed to work with UNeTech in translating our innovations into effective start-up companies,” Dr. Stergiou added.

Ultimately, UNeTech will report to the UNMC chancellor, Jeffrey P. Gold, M.D., and the UNO chancellor, John Christensen, Ph.D. An Oversight Committee made up of three leading business people who are all graduates of the UNMC College of Medicine– James Linder, M.D., F. Joseph Daugherty, M.D., and Tyler Martin, M.D. – will serve in an advisory capacity.

Dr. Markin said UNeTech’s mission will be to bridge the gap after UNeMed identifies promising technology and intellectual property and provide the support to allow these fledgling companies to become successful.

“It’s called the ‘Valley of Death,’” Dr. Markin said. “It’s the most difficult hurdle for new businesses to clear – 50 percent of start-up companies fail in the first three years.”

UNeTech hopes to make it easier for start-up companies to succeed by providing affordable space in its three-level, 5,000-sq.-ft. building. The top two levels will provide conventional office space, while the unfinished basement will serve as a laboratory/workshop area.

UNeTech was approved by the University of Nebraska Board of Regents in 2015, and the Nebraska Legislature will allocate $1 million each year to cover UNeTech’s operating expenses.

Dr. Markin said UNeTech’s goals over the next five years include:

To accomplish these goals, Dr. Markin said UNeTech will seek to raise between $7 million to $10 million in funding from individuals and outside agencies to invest in the potential technology and start-up companies.

“This will allow us to create a revolving fund with enough capital to maintain a strong growth environment into perpetuity,” he said.