TEL AVIV, Israel (January 18, 2022)—A startup company, built on an innovation developed at the University of Nebraska at Omaha’s world-renowned biomechanics department, recently closed a seed investment round worth 3 million Israeli shekels, or about $965,000, according to current exchange rates.

Led by Israeli investment group, eHealth Ventures, the seed round will finance additional development and clinical trials for the startup, RespirAI Medical.

“The funds will help us to achieve some key development and clinical milestones,” RespirAI CEO Nimrod Bin-Nun said in an email. “The main one is a multi-sites clinical trial that will get us ready for a regulatory trial.” 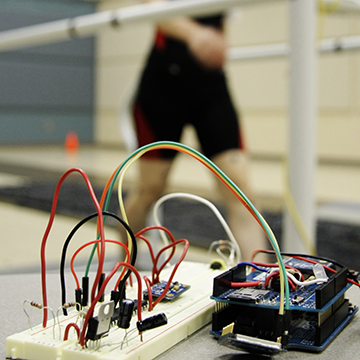 Pictured here is one of the earliest prototypes for the device that could detect imminent exacerbations of chronic obstructive pulmonary disease, before any obvious symptoms are present. (file photo)

ResiprAI is one of 17 portfolio companies at eHealth Ventures, a multinational consortium that counts Mayo Clinic and Amgen among their partners.

“Home monitoring for lung diseases is an under-served area, and we are happy to invest in this innovative company, based on foreign IP, that will make full use of the funding and unique strategic support we provide,” eHealth Ventures Vice President for Business Development, Ophir Shahaf, said in a press release.

The core technology is believed to be the first device that can accurately detect the earliest signs of what is known as a “COPD exacerbation.”

COPD, short for or chronic obstructive pulmonary disease, is a condition that slowly destroys a patient’s lungs, eventually forcing them to live in constant breathlessness.

On occasion, COPD symptoms can suddenly get much, much worse in a potentially fatal flare-up called an exacerbation.

COPD is the third-leading cause of death on the planet, and exacerbations are most often only treatable in intensive care units. Often, a patient’s best chance at survival relies on how quickly they can get to a hospital.

The root cause of exacerbations remains a mystery, but RespirAI’s wearable device could finally provide COPD sufferers some advance warning that an exacerbation may be imminent.

The device measures the relationship between the rhythms of a patient’s pulse rate and their breathing and walking patterns. A subtle, measurable change in those patterns help determine the likelihood of an exacerbation.

It will likely take another year or more before the device is available to the public.

RespirAI was initially created through an intellectual property license deal brokered by UNeMed, the technology transfer and commercialization office for UNO and the University of Nebraska Medical Center. The original invention was a collaboration between UNMC’s Stephen Rennard, MD, and UNO Biomechanics researcher, Jennifer Yentes, PhD.