“We’ve worked with UNeMed in the past, and it always went well,” said UNO Associate Vice Chancellor Scott Snyder, Ph.D. “We wanted to make that process easier and more efficient for everyone, and this arrangement does that.”

Dating back to the mid-1990’s, UNeMed has received about 50 new inventions from UNO inventors. Most UNO inventions, however, are more recent, emanating from UNO’s cutting edge Department of Biomechanics. Perhaps one of UNO’s more noteworthy innovations led to the creation of a new startup company, Avert, which promises to help athletic teams quickly and accurately diagnose concussions.

The new arrangement with UNeMed removes many institutional hurdles, allowing faculty, students and staff at UNO to work directly with the technology licensing experts at UNeMed. 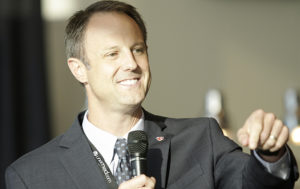 “This is perfect for us,” UNeMed president and CEO Michael Dixon said. “We have a long history of working with UNO, and many UNMC researchers have strong collaborative ties to UNO. Hopefully, this will allow us to partner more with UNO researchers and help develop their innovations into products that can have a positive impact in the market.”

Common at virtually every major university in the nation, technology transfer offices work to protect the discoveries, innovations and inventions of their researchers. Tech transfer offices like UNeMed help identify industrial partners that can bridge the funding gap between a discovery and a product on store shelves.

“To have the expertise and experience of the people at UNeMed at our disposal is a huge asset,” Snyder said. “This should be a huge boost for many of our faculty, students and staff that want to see their ideas developed into products that help people.”

Initially established in 1991 as the tech transfer office for the University of Nebraska Medical Center, UNeMed now serves all University faculty, students and staff at both Omaha campuses and the College of Dentistry in Lincoln. UNeMed’s sister office, NUtech Ventures, serves the remainder of the University’s resources in Lincoln and Kearney. 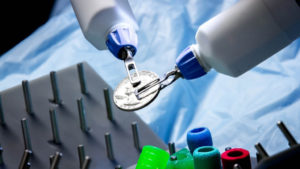 Common routes to commercialization include establishing relationships with industrial partners for sponsored research agreements, signing licensing agreements with established commercial entities or building new startup companies. For example, a UNMC surgeon and a UNL engineer collaborated on a surgical robotic device to create Virtual Incision, a biomedical startup. Virtual Incision recently announced a successful Series B financing round of $18 million.

Virtual Incision is just one of 58 new startups UNeMed has help build in its 26-year history. UNeMed has also helped UNMC secure an additional $6.32 million in sponsored research while processing more than 1,330 new inventions from University faculty, staff and students.