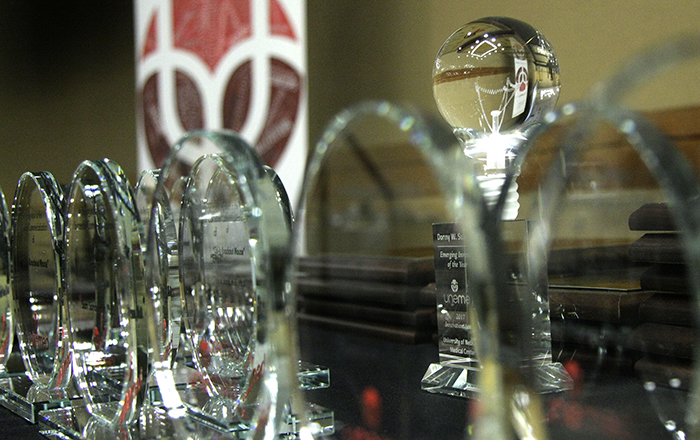 CORRECTION: A previous version of this story omitted Shixuan Chen, Ph.D., as a co-inventor on the Most Promising New Invention. We regret the error. 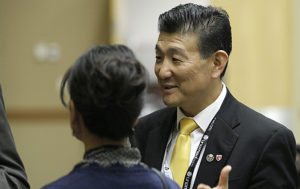 Held at the Michael F. Sorrell Center’s Truhlsen Campus Events Center at UNMC, the Innovation Awards Banquet recognized inventive faculty, students and staff at the University’s Omaha campuses. The event rewards the achievements of those who submitted a new invention, received a U.S. patent or licensed a technology during the previous fiscal year.

James Linder, M.D., delivered a keynote address that explored five key elements of innovation. His main points included the power of the university; the patience needed for the “long road of innovation;” knowing your own strengths and weaknesses; and seizing the opportunities that arise during the accumulation of experience.

His final point centered on the reward of innovation. It’s not the potential of financial gain that keeps the wheels turning on the road from the idea to commercial success.

“The ultimate reward is improving lives,” said Dr. Linder, who served as the Interim President of the University of Nebraska in 2014 and currently heads the University Technology Development Corporation. “The real reward is seeing your research or discoveries actually put into practice.” 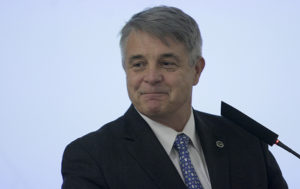 The evening began with brief remarks from UNMC and UNO Chancellor Jeffrey Gold, M.D., who told an estimated crowd of 148 about the University of Nebraska’s value to the state, region and nation at large.

Nebraska is “a critically important part” of the future, he said, creating tomorrow’s workforce; developing the next generation of treatments, cures and discoveries; and providing power to the local economic engine through its technology transfer efforts.

“I just wanted to make sure that you heard loud and clear how much we appreciate you, and that I personally appreciate everything you do,” he told a room full of academic researchers and inventors.

Dr. Suh, the Emerging Inventor winner, developed several new inventions during the previous fiscal year. An associate professor in UNMC’s department of ophthalmology and visual sciences, Dr. Suh submitted five inventions in 2017, four of which allow for more precision and stability while performing delicate procedures on or around the eye. They include clever designs to common medical tools such as a syringe, forceps and a needle holder.

Drs. Carlson, Xie and Chen earned the most promising new invention award for their collaboration on a medical device that has the potential to stop severe bleeding. The device is a sponge made from nanofibers using a proprietary process. The sponges show particular promise in traumatic abdominal injuries, where applying pressure to stop or slow bleeding would be almost impossible.

The sponges are more absorbent than traditional sponges, and yet retain their overall size and shape. They can also be manufactured into a wide range of sizes of shapes to fit differing needs. Dr. Carlson is a professor in UNMC’s department of surgery, and Dr. Xie is an assistant professor UNMC’s regenerative medicine program. Dr. Chen is a post-doctoral research associate at UNMC. 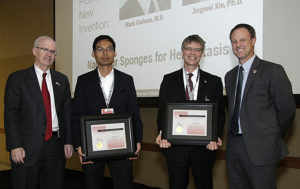 Other innovation Week events included a Kick-Off event; a panel discussion about intellectual property issues that might emanate from the CRISPR/Cas9 gene editing tool; a hands-on workshop aimed at helping researchers perform their own patent searches; a panel discussion about alternative science careers; and a luncheon focused on celebrating Nebraska women in science, technology, engineering and math. The luncheon was hosted and sponsored by BioNebraska.