LINCOLN, Neb. (July 9, 2019)—For the second consecutive year, the University of Nebraska has been ranked among the top 100 universities in the world in earning U.S. patents to protect the innovative research and discoveries of its faculty.

Earning patents allows NUtech Ventures and UNeMed to work with NU faculty, staff and students to bring their research in areas like agriculture, healthcare, engineering and many others to the marketplace. The result is new startup companies, jobs and university-licensed products that grow the economy and improve quality of life in Nebraska and beyond.

“To be in the company of the world’s leading research universities is another sign that the University of Nebraska is a force for growth and change for the people of our state,” said President Hank Bounds. “While it’s an honor to be recognized, what truly matters is what this ranking signifies: That the University of Nebraska is home to some of the most talented, creative and visionary faculty in the world. I could not be more proud of the life-changing impact of their work.”

The new report’s rankings are based on 2018 patent data from the U.S. Patent and Trademark Office. After securing a patent, the university brings research to market by licensing technology to existing companies or university startup companies. Most university technology is considered early-stage and requires additional research and development.

“This is a reflection of the kind of talent we see every day walking up and down hallways throughout the university system. This doesn’t happen without a culture of innovation,” UNeMed President and CEO Michael Dixon said of NU’s top-100 ranking. “That starts with the administration, right through all the creative and curious faculty, staff and students developing the next generation of innovations that can improve our world.”

Brad Roth, executive director of NUtech Ventures, said: “The ability to protect new innovations from our university’s research is an important first step for commercialization and eventual impact on society.”

The University of Nebraska’s 31 patents in 2018 include, for example, University of Nebraska-Lincoln research to develop a vaccine that could help producers across the globe fight a devastating swine virus. Porcine reproductive and respiratory syndrome virus (PRRSV) is a viral pathogen that causes abortion in pregnant sows and pneumonia in young pigs. The virus can also suppress a pig’s immune system, leading to enhanced susceptibility to other infectious diseases. PRRSV costs the U.S. swine industry more than $640 million per year. A team led by Fernando Osorio and Hiep Vu at the Nebraska Center for Virology is working on a vaccine that could protect against some or all of the variants of the virus, which would significantly benefit swine health as well as producers in Nebraska and around the world. 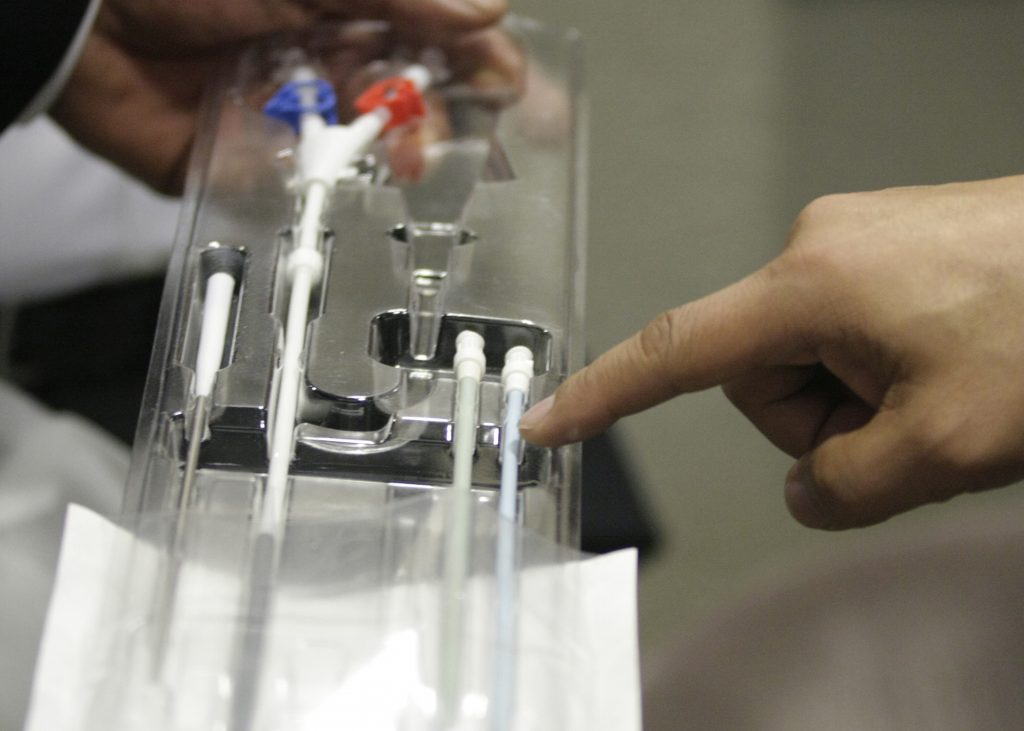 An early working prototype of the hemodialysis catheter currently under license with Chrysalis Medical.

Another patent is for a new catheter tube that will help patients undergoing hemodialysis to treat kidney failure. Conventional catheters often need to be replaced in expensive surgical procedures after they are blocked by thick tissue that builds up over time. A new catheter tube created by Marius Florescu, M.D., an associate professor in the UNMC Department of Internal Medicine’s Division of Nephrology, is designed with a small balloon that can expand to remove the buildup. Dr. Florescu’s design would significantly reduce the cost of removing the blockage by eliminating the need for additional procedures. The device is licensed to California-based Chrysalis Medical, who is preparing an application for FDA clearance.