Scientists explore the ‘Dark Side’: Careers away from the bench

OMAHA, Neb. (Sept. 12, 2014)—While not all scientists accept the existence of careers outside academia or industry, universities are finding value in showcasing alternate career paths available to scientists in biomedical fields. UNMC postdoctoral scholars and graduate students had the unique opportunity Thursday to explore a career options within the legal community. 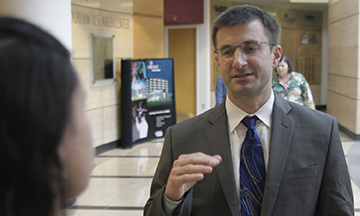 Robert Netter, Ph.D., J.D., a patent attorney in Philadelphia, chats with a audience member following a short presentation about alternate career paths for grad students and postdocs in scientific fields.

Robert Netter, Ph.D., J.D., a partner at Dann, Dorfman, Herrell, and Skillman, an intellectual property law firm in Philadelphia, took time off from his busy schedule as a patent attorney to discuss opportunities for scientists within the legal community.

Dr. Netter was once a Cell and Molecular Biology graduate student researching Ebola virus proteins. His frustrations with academia began early when his research project hit a roadblock and went off the cliff taking nine months of work with it. Adding insult to injury, his PI had just received tenure, was disengaged with his lab, and left Netter in academic limbo.

Frustrated with academia, Netter began exploring his options while still in grad school. He befriended the student across the hall, whose goal was to become a patent attorney just like her father. Netter jumped on the bandwagon and read up on the field. Following graduation and while finding a position with a law firm, Netter spent just two short months as a post-doc before he definitely “crossed over to the dark side.”

Netter recalled the challenges of his decision. At one point he was working 7-5 at a law firm; attending law school at Temple University by night; getting home to study until midnight, only to get up in the morning and do it all over again Monday through Thursday. He enjoyed Fridays because he “only had to work in the day, so Fridays were great.”

Two of his kids were also born while he was in law school: “I tried to do everything all at once, and I don’t know how I lived.” Dr. Netter is proof that if you can succeed if you set your mind to it.

At the time there was a “stigma associated with leaving academia.” Today, there are more options and support available for Ph.D. graduates. The legal field includes positions in academic tech transfer offices, such as UNeMed; small and large law firms; government, including the United States Patent and Trademark Office; and investment banking.

Freshly graduated scientists with no legal training can find positions as technical advisers. This position involves what Netter later referred to as “grunt work” including writing drafts for patent applications and performing prior art searchers to help write counterarguments. Scientists benefit by becoming familiar with legalese, the language of the legal world.

Netter advised that anyone interested in the legal path should definitely become familiar with the field by working and pursuing the USPTO patent bar. Passing qualifies them as a Patent Agent capable of submitting and prosecuting patent applications. They are also taken more seriously because they demonstrate that they have invested time and money to pursue the career path.

Scientists that go to law school and pass another bar exam then become Patent Attorneys and have a shot at becoming partners at a firm someday.

Dr. Netter still uses his Ph.D. skills every day. “I still like to consider myself a scientist first, and an attorney second,” he said. The job is challenging, yet satisfying as Netter works with government bureaucrats who can be difficult. He also works with universities and appreciates helping the “underdog.” It’s a stable career that is also financially rewarding, particularly after making partner, he said.

However, the grass doesn’t start out green on the other side. Choosing to follow a legal career guarantees a long road and it’s hard to start over, especially after completing a Ph.D. program. All that Ph.D. training in the lab is good practice for enduring the long, stressful hours that can come with the legal field. It’s also a service industry, and clients always come first. Clients must always be happy because no clients, means no job.

Another drawback to working in the legal field?

“Wearing these stupid suits,” he said. “I’d rather be wearing jeans and a T-shirt.”

But suits come with the territory, and there’s always the weekend.

Agnes Lenagh, Ph.D., is a postdoctoral fellow at UNeMed, working as a licensing associate. She also uses her Ph.D. training every day in helping scientists move their work forward, toward improving people’s lives.

Blog, News Scientists explore the ‘Dark Side’: Careers away from the bench

Agnes Lenagh was a licensing specialist at UNeMed Corporation, the technology transfer and commercialization office (TTO) for the University of Nebraska Medical Center. UNeMed serves all UNMC researchers, faculty and staff who develop new biomedical technology and inventions, and strives to help bring those innovations to the marketplace. Contact the author at agnes.lenagh@unmc.edu or 402-559-2179.