UNeMed and Biomedical Research in Nebraska

The Reader interviews UNeMed President Dr. Michael Dixon who discusses the role that UNeMed plays in the transfer of Biomedical innovations and the research environment in Nebraska.  (Link to full story in The Reader.)

Billions of dollars go into medical research, and billions can eventually be made from the resulting products.

Unfortunately, there is often a large gap between an idea and its profits. This is called the “valley of death” in the health care field, and it’s UneMed’s job to bring local ideas through that valley to the other side.

UNeMed is a division of the University of Nebraska Medical Center, transferring intellectual property from the laboratory to the marketplace and helping to build a bioscience sector in Omaha and Lincoln. UNeMed is funded by UNMC, and from royalties generated from licenses. UNMC researchers brought in more than $115 million of funding during the 2009-10 fiscal year, from around 200 funded projects. According to UNeMed president Michael Dixon, all inventions stemming from that research are submitted to his division and evaluated for commercial potential. 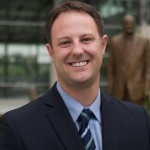 “We look at two things,” Dixon says. “First, can we get intellectual property (IP) protection? We utilize sophisticated search techniques, and have a patent attorney in-house. If there is not IP available, we probably cannot invest in it.”

The second factor is the potential market for an invention, and that is more difficult to measure. UNeMed’s 12 full-time employees and six interns talk with contacts in the industry and investigate competitive products.

“Is this quicker, faster, better?” Dixon says. “Do we have an advantage? We try to assess the possible value.”

“We license the technology or start a company that licenses it,” Dixon says. “We have about 120 technologies available for licensing right now, and we do between 12 and 18 new licenses per year. Some of these are for new technology, and some for older technology.”UNMC researchers submit about 60 inventions to UNeMed annually, and Dixon’s staff applies for IP protection on about half of those. Dixon estimates that about five inventions per year eventually find a company interested in developing them.

“Even if they (private companies) are not interested in an asset we have, perhaps there are some synergies and that allow productive research to go on. We want to bring in that corporate money to go along with government research money.”

Dixon says corporate sponsorships are typically in the range of $1 to $2 million, not including the sponsorship of clinical trials at UNMC.

UNeMed was founded in 1991, and Dixon says it was initially a struggle to persuade companies on the coasts that world-class research was being done in Omaha.

Dixon has a PhD in molecular biology from UNMC, and has worked for UNeMed since 2003. He was director of intellectual property and then chief operating officer before being named president last year.

As UNMC has become more prominent it has become easier to find potential business partners.

“UNMC is more on their radar now,” Dixon says. “We get into conversations quicker without having to describe where Omaha is. Now, we have companies coming to talk to us and they know about the work we are doing.”

Dixon says research by UNMC’s Center for Drug Delivery and Nanomedicine draws interest from many potential partner companies; so has work on Alzheimer’s and Parkinson’s diseases by Dr. Howard Gendelman.

There is a long timeline between a medical invention and the eventual financial payoff, and Dixon says one of UNeMed’s functions is to keep the momentum going through the slow times.

“Just to illustrate the timing involved, we are working with a start-up called Versalion right now on a delivery polymer for arthritis,” he says. “It shows more efficacy and fewer side effects, and has the ability to localize joints that are inflamed.”

This technology was presented to UNeMed three years ago by Dr. Dong Wang. Dixon says that makes it an “early stage” project.

“Assuming everything goes as well as possible, it could still be another seven to eight years before anything hits the market,” he says.

Versalion is talking to venture capitalists and hopes to close a Series A financing round soon.

UNeMed’s work is slow and can be costly, but Dixon believes it provides a big economic return for the area. He said 30 local jobs are created for every million dollars of research grants that UNMC brings in. The resulting technologies can create spin-off companies or persuade out-of-state companies to open offices here.

Dixon acknowledges bioscience is not yet one of the area’s premier economic sectors, but he believes that is changing. The nonprofit think tank Battelle recently assessed economic opportunities in Nebraska, and its report identified bioscience as one of the state’s strengths for the future.

“Between UNMC, Creighton Medical Center, Boys Town National Research Hospital, and people in Lincoln, you have a very strong corridor of bioscience,” Dixon says. “There are big research dollars, and very competitive grants being won. Omaha and Lincoln don’t really know about all of the biomedical research that’s going on.”