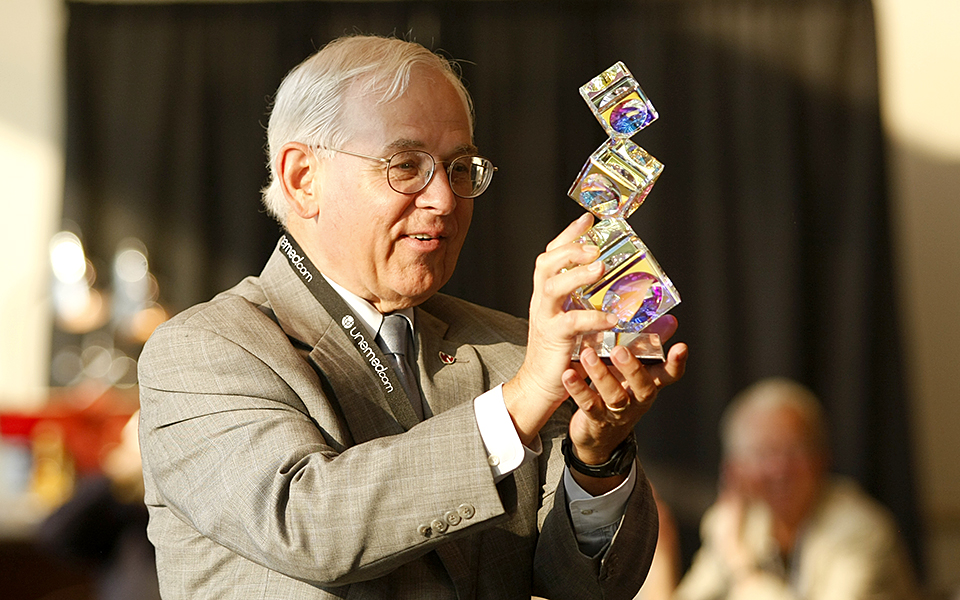 Don Leuenberger, UNeMed’s Chair of the Board, raises a special gift he received in recognition of 24-years of dedicated service since UNeMed was founded in 1991.

Highlighted by a keynote address from UNMC Chancellor Jeffrey Gold, M.D.—and a special award presented to UNeMed Board Chair Don Leuenberger for 24 years of service—the meeting was an invitation-only event at TD Ameritrade Park in downtown Omaha. 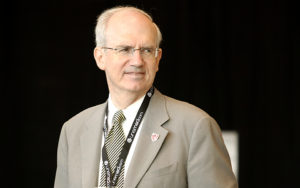 Chancellor Gold told the gathering of select University leaders, researchers and UNeMed staff that UNMC’s innovative researchers all share the same goal of improving lives. But that research can’t get there by itself.

“UNeMed is an incredible organization that provides the infrastructure, provides the glide path…and turns it into intellectual property that changes people’s lives,” Gold said.

UNeMed president and CEO Michael Dixon told the crowd that UNMC’s invention pipeline continues to thrive with 63 new invention disclosures filed in fiscal 2014. In the last five years, UNMC researchers developed 412 inventions—compared to the 291 filed during the previous five years.

Dixon also discussed four initiatives for fiscal 2015, beginning with the continued operation and expansion of UNeMed Health Consulting Shanghai. Doing business as UNMC-China, UHCS is now fully operational and has already licensed one UNMC invention to be developed in China, Dixon said.

UNeMed will also work with the University of Nebraska-Lincoln to develop a certified biomedical entrepreneurship course that aims to help UNMC students gain more business savvy. 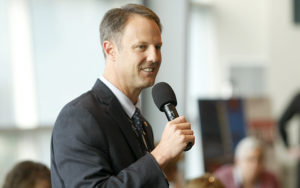 UNeMed will collaborate with the University of Nebraska at Omaha on a third initiative: UNeTecH. It will be a support structure for biomedical and high-tech inventions that will bring together expertise and resources to build and develop innovative technologies.

The final planned initiative is a next-generation approach to education with highly sophisticated simulation and training facilities. Called iEXCEL, Dixon said the program “is going to fundamentally change the way medical education occurs.”

Dixon also recognized board chairman Don Leuenberger and his 24 years of service—a fixture at UNeMed since its founding in 1991, even playing a role in its creation. When UNeMed was created there weren’t many universities with their own technology transfer offices, but Leuenberger immediately saw the value in protecting and developing UNMC’s research innovations, Dixon said.

“Don had the foresight to say we need a structure for this,” Dixon told the gathering.

One Response to UNeMed highlights successes at ’15 Shareholder Meeting