Facility is the most technologically advanced in the country 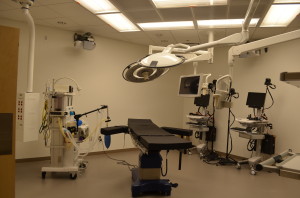 The new surgical simulation lab at the University of Nebraska Medical Center is among the nation’s most technologically advanced.

Modeled after the simulation center at the Mayo Clinic, the surgical suite is the most technologically advanced in the country and will allow UNMC to become a regional training and testing site for medical students. Only one-third of all medical schools in the United States have a simulation center.

The suite was made possible by a $1 million gift from Wayne Ryan, Ph.D. and his late wife Eileen.

“What we have to stress is that surgery has become so incredibly complicated and so technologically dependent that it’s a little bit like trying to fly a 747,” said Dmitry Oleynikov, M.D., the Joseph and Richard Still Endowed Professor of Surgery at UNMC. 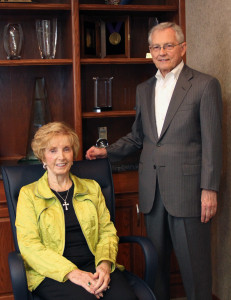 The new facility, located on the first floor of the Sorrell Center, simulates what happens in a modern operating room, he said.

“Along with the simulated operating room, this suite also features pre and post op care areas,” said Paul Paulman, M.D., assistant dean for clinical skills and quality in the UNMC College of Medicine.

And it is part of the clinical skills center, which is home to a variety of high fidelity task trainers and mannequins that allow learners to practice many invasive procedures prior to performing those procedures on humans, he said.

“We haven’t touched what we can do with it,” said Patti Carstens, program manager in the clinical skills center. “We tried to be as flexible as we can, because we know we’re probably never going to get a donation like this again. We built it for now and the future.”

Multimedia equipment allows for “virtual reality” scenarios in the middle of surgery. Monitors will show anything and everything. Teachers can run the session or interact with students from a control room perched behind one-way glass.

“Sometimes they don’t see the big picture and how it all interrelates until we videotape it and play it back and talk about it,” Carstens said.

Cameras and audio-visual retrieval systems allow students and teachers to go back and review training sessions. There will be mannequins – some costing up to $250,000 – which will “log” every touch and allow for training in endoscopic and laparoscopic surgery.

Through a partnership agreement, the facility also will be used by students and faculty at the Creighton University School of Medicine.

Through world-class research and patient care, UNMC generates breakthroughs that make life better for people throughout Nebraska and beyond. Its education programs train more health professionals than any other institution in the state. Learn more at unmc.edu.