OMAHA, Neb. (Jan. 22, 2014) — A new study by the University of Nebraska Medical Center and Roswell Park Cancer Institute shows that a combination treatment strategy may provide a new option for patients with recurrent ovarian cancer.

The study, published in Cancer Immunology Research, a journal of the American Association for Cancer Research, found clinical benefit for women who were treated with the drug decitabine prior to administration of chemotherapy and a cancer vaccine. 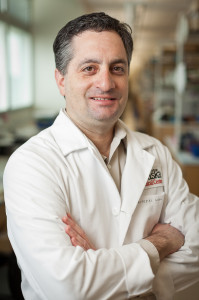 “We are encouraged by the results from the phase I clinical study and look forward to extending this concept to the phase II setting, where treatment efficacy is the principal end point,” said Adam Karpf, Ph.D., associate professor, Eppley Institute, and member, Fred & Pamela Buffett Cancer Center, at UNMC.

Dr. Karpf was co-principal investigator on the study along with Kunle Odunsi, M.D., Ph.D., professor and chair of the department of gynecologic oncology and director of the Center for Immunotherapy at Roswell Park Cancer Institute, Buffalo, N.Y.

The deadliest of gynecologic cancers, ovarian cancer is the 10th most common cancer among women and the fifth leading cause of cancer-related death among women.

A prerequisite for an individual’s immune system to recognize and attack a tumor is the presence of high levels of a protein not normally found in the patient’s healthy cells. Proteins with this profile are called tumor antigens and can be good targets for anticancer vaccines.

“Preclinical studies by our group have shown that a specific class of tumor antigens is regulated by DNA methylation,” Dr. Karpf said. “Based on this knowledge, we developed the new clinical regimen.”

The investigators conducted a phase I dose-escalation trial of the DNA methyltransferase inhibitor decitabine, to which they recruited 12 women with epithelial ovarian cancer that had not responded to multiple lines of chemotherapy, with an estimated progression-free survival time of three months.

All patients received decitabine on day one, the chemotherapy drug doxorubicin on day eight, and the cancer vaccine on day 15.

In preclinical analysis reported as part of this study, the investigators established the best sequence of drug administration: decitabine was effective only when administered before chemotherapy, and it was ineffective if given after chemotherapy; vaccine administration was the last step.

Of the 10 patients evaluated for clinical response, five had stable disease for up to 7.8 months, and one had a partial response with disease remission that lasted 5.8 months.

The dose escalation data suggested that lower doses of decitabine are associated with improved clinical response using this regimen. The treatment was well tolerated, and adverse events included hematologic side effects that were clinically manageable.

Dr. Odunsi said, “Although clinical results were not a focus of this phase I trial, we saw evidence of clinical benefit in up to 60 percent of the patients with chemotherapy-resistant tumors. The combination of decitabine, chemotherapy and the cancer vaccine may have enabled this remarkable effect.”

Based on the encouraging findings of the Phase I trial, the investigators are planning a Phase II trial at UNMC and Roswell Park to specifically evaluate the clinical efficacy of this novel chemo-immunotherapy approach in patients with recurrent ovarian cancer.