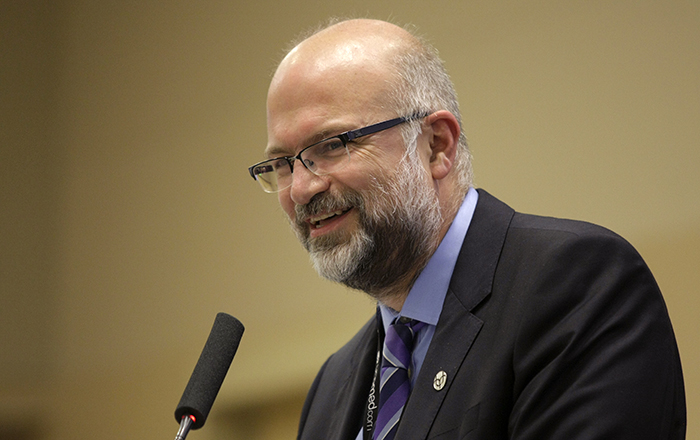 Founding chair of the department, Nick Stergiou, Ph.D., accepts the 2018 Innovator of Year award on behalf of UNO’s Biomechanics Department, which was awarded the honor during the 2018 Innovation Awards on Oct. 25, 2018.

OMAHA, Nebraska (Oct. 29, 2018)—The University of Nebraska at Omaha highlighted the 12th installment of the annual Innovation Awards Banquet Thursday night at the Stanley Truhlsen Events Center. In a break from tradition, UNO’s Biomechanics program became the first department to claim the Innovator of Year award.

Sponsored and hosted by UNeMed, the technology transfer and commercialization office for the University of Nebraska Medical Center and UNO, the awards ceremony also honored a Most Promising New Invention Award and a Startup of the Year. An estimated audience of 183 attended the event.

Each year UNeMed celebrates the discoveries and creations that emanate from UNMC and UNO with an awards ceremony that honors all faculty, students and staff who submit a new invention, secure a United States Patent or sign a licensing agreement with an industrial partner during the previous fiscal year.

This year, UNeTech also presented its first-ever award, the Startup of the Year. UNeTech is the university’s startup accelerator and incubator program, which was established about a year ago to help nurture early stage technologies and fledgling startup companies with university ties. 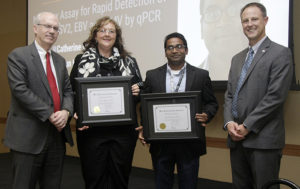 Centese, Inc., was named the Startup of the Year. Led and co-founded by Nebraska native Evan Luxon, Centese is poised to bring to market Thoraguard, a medical device that automatically clears chest tube blockages. Centese is awaiting final FDA approval, which could soon put Thoraguard on the market.

The test has already attracted outside interest with Omaha’s Streck, a local biotech company specializing in medical testing systems. Streck and UNeMed will soon sign a sponsored research agreement that will help advance the technology.

Each year the Most Promising New Invention is awarded to “an innovation with the highest potential to benefit the public good.”

The top prize was claimed by Nicholas Stergiou, Ph.D., who accepted the Innovator of the Year award on behalf of his Biomechanics Department at UNO. 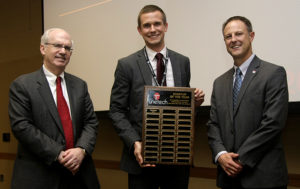 Evan Luxon (middle) was presented with the first-ever Startup of the Year Award as the co-founder of Centese, Inc.

Dr. Stergiou is the founding chair of the Biomechanics Department, which has produced a remarkable portfolio of innovations that could all have significant impacts in healthcare in the coming years.

Among those innovations is a gait analysis system that can look at the way people walk and determine the risk of falls in the elderly or other frail patients. Another innovation uses the subtle fluctuations as person balances themselves to detect concussion and potentially other traumatic brain injuries. Another program is building low-cost, 3D-printed prosthetic limbs and cybernetics. And yet another program could predict sudden onset of life-threatening symptoms for sufferers of Chronic Obstructive Pulmonary Disorder or COPD. 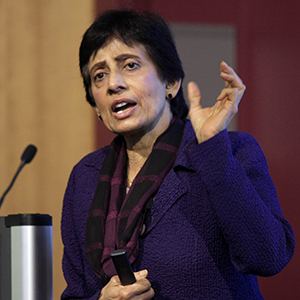 Former pharmaceutical executive, Prabhavathi Fernandes, Ph.D., delivers an insightful seminar, “Moving into the pharmaceutical industry—can the dark side be bright for you?” during 2018 Innovation Week.

The Innovation Awards is a part of UNeMed’s Innovation Week, which began with a Kick-off event on Monday in the DRC. There UNeMed staffers handed out T-shirts, doughnuts, first aid kits and other freebies. Innovation Week concluded on Friday with a free seminar about alternate science careers in the pharmaceutical industry and the 3D-printing Invent-a-thon.

Learn more about all the awardees and the 2018 Innovation Awards in the official Awards program below.

2018 Innovation Awards Program by on Scribd

One Response to UNO Biomechanics named Innovator of Year