Year in review: Highlights from 2018

It’s time to look back at another year of tech transfer and commercialization at the University of Nebraska Medical Center and the University of Nebraska at Omaha. We like to take this time to review highlights from last year, and reflect on some of the more important stories, developments and most popular posts from 2018. (Spoiler alert: As an indicator on how great our year was, this list goes to 11.) 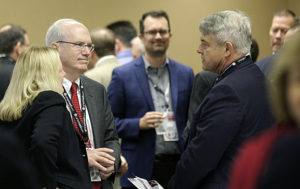 Karen Linder chats with UNMC and UNO Chancellor Jeffrey Gold, M.D., and her husband, James Linder, M.D., the CEO at Nebraska Medicine, shortly before the 2018 Innovation Awards ceremony on Thursday, Oct. 25, 2018, at the Stanley Truhlsen Events Center at UNMC.

1. Innovation Week
Innovation Week remains the most well trafficked area at UNeMed.com, and it’s not even close. The event’s popularity is no surprise considering it’s an annual showcase for all of UNMC and UNO innovations and their inventive faculty, students and staff. (It follows, then, that the story announcing the major award winners was among the most popular news stories of 2018.) At the 2018 awards in October, UNeMed honored Catherine Gebhart, Ph.D., and Varun Kesharwani, Ph.D., as co-inventors of the Most Promising New Invention, and Centese won the first-ever Startup of the Year award—presented by the University’s incubator program, UNeTech. The top prize of Innovator of the Year went to UNO’s entire Biomechanics Department for their remarkable body of work. 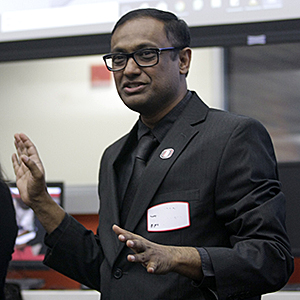 2. Food for thought: UNO capstone program can drive UNMC innovations
UNeMed’s most popular blog post of 2018 touched on the growing collaborations between UNMC and UNO campuses. This post focused on UNO’s College of Information Science and Technology, but UNO’s innovative culture and deep involvement continued to grow in what became a recurring theme for 2018, as you will note below.

3. Product Pipeline
In April, UNeMed produced a new feature, UNeMed’s product pipeline, which proved to be a popular landing spot, a pleasant surprise. The pipeline highlights selected technologies and where they fit in the development cycle, whether they’re a device still in the prototyping phase, a pharmaceutical entering Phase I clinical trials or a finished product currently available in the marketplace.

4. UNMC solves big data problem in EHRs
UNMed negotiated a licensing deal that could bring to the market a solution to a continuing problem with modern electronic health records. The solution helps make cancer test results more accessible, making physicians and care providers more efficient with their diagnoses and treatments. 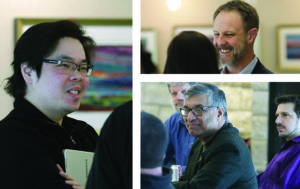 6. UNMC-UNO Innovation Accelerator meets for first time
A small meet-and-greet between the UNMC College of Medicine’s Department of Emergency Medicine and UNO’s College of Information Science and Technology garnered a lot of attention back in February. This meeting was partly spurred by the success of collaboration found within the capstone program (see No. 2).

7. Taconic inks license deal for Easi-CRISPR
Taconic, a provider of rodent models for researchers, signed a licensing agreement for the use of Easi-CRISPR, a genetic insertion protocol that could shave six months off of critical research project timelines.

8. Skin holds off nearly all infections, but no match for biofilms
An interesting blog post—and fun infographic—noting the skin’s remarkable ability to ward off infections.

9. UNeMed launches tech transfer podcast
In the summer, UNeMed staffers Joe Runge, Tyler Scherr and Charlie Litton launched their first tech transfer-related podcast as the Innovation Overground. By the end of the year, the trio had voiced nearly two dozen episodes and plan to continue airing new episodes in the foreseeable future.

10. UNO, UNeMed expand tech transfer relationship
Finally, UNO again made headlines with UNeMed, thanks to this new services agreement. The arrangement made UNeMed the exclusive tech transfer office for UNO, which opened the door to a flood of new invention disclosures.

11. MidWest Drug Development Conference is a ‘homerun’
If it had more time, this would surely climb higher on this list. UNeMed finished it’s revision of Demo Day, and pulled together the MidWest Drug Development Conference as a way to bring together most major Midwestern universities and their most promising drug-related innovations. Industry and investment groups converged on Omaha for a two-day conference that blew the doors off all expectations. Planners are already busy planning a return in 2019, and expect to announce critical details in the early weeks of 2019.

Classics
Several posts from previous years remain popular and relevant:
1. The importance of technology transfer
2. How to determine who is an inventor on a patent: Unraveling inventorship vs. authorship
3. Technology transfer 101: Defining research commercialization
4. Veins and arteries are just pipes, right?
5. What you need to know about royalty distribution