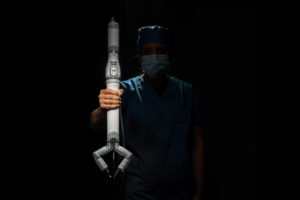 “I feel fortunate to have worked with Virtual Incision over the years as they developed this technology into a successful platform,” UNeMed president and CEO, Michael Dixon, said. “It’s a great example of University innovation, and the time and energy it takes to develop a novel idea into a product. The success of today took more than a decade to build, and I’m excited for their growth over the next 10 years as their platform technology moves into the surgical rooms where it can have a direct impact on patients.”

MIRA weighs about two pounds, giving it a distinct advantage over other surgical platforms that require the dedicated space of an entire room. Surgical staff can easily move Virtual Incision’s robot from room-to-room as needed, even for complex procedures like a colon resection.

A typical colon resection surgery today requires a large incision so the surgeon can remove a portion of a patient’s lower intestine. It requires months of recovery and rehabilitation. But a skilled surgeon using Virtual Incision’s MIRA system can shave that recovery time to mere days.

“The ability of MIRA to successfully perform colon resection—a challenging procedure in minimally invasive surgery that requires multi-quadrant anatomical access and significant robotic strength—demonstrates the huge potential of the platform,” Dr. Farritor said in the press release. “This funding milestone represents a step forward in our goal to deliver a miniaturized solution for robot-assisted laparoscopic surgery, regardless of the site of care.”

In August, Virtual Incision announced the “world’s first surgery using the MIRA Surgical Platform.” Michael Jobst, MD, performed a right hemicolectomy at Bryan Medical Center in Lincoln. The procedure was part of an ongoing clinical study that could lead the U.S. Food and Drug Administration to approve the device for use in humans.

According to the issued release, the funding will also support a “research and development pipeline” that include “a family of mini-robots optimized for additional operations such as hernia repair, gallbladder removal, hysterectomy, sleeve gastrectomy and others.”

The successful funding round was led by Endeavour Vision and Baird Capital, with participation from returning investor Bluestem Capital and others, according to the announcement.

Including this most recent raise, Virtual Incision has now attracted nearly $100 million in investments since its initial founding in 2006.