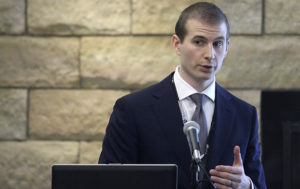 One potentially effective way to treat high blood pressure is to destroy, or ablate, all or parts of the sympathetic nerves of the kidneys. The problem, however, is until now there has not been an accurate tool that helps clinicians in real-time determine if the procedure is targeting the proper areas of the kidneys.

UNMC researchers have shown that the sympathetic vasomotion detection system can accurately detect renal denervation in rat and rabbit models. A current study in pigs is expected to further validate the system’s ability and accuracy.

The sympathetic vasomotion detection system is a versatile tool that can also monitor and detect other diseases or conditions associated with the sympathetic nervous system.

In addition to their work with renal denervation, UNMC researchers are also investigating the device’s use as a screening tool for blood pressure-related fainting and non-invasive hemodynamic monitoring.

To discuss licensing opportunities about this technology, contact AJ Crawford, at ayrianne.crawford@unmc.edu or 402-559-4098.