The trouble with fighting rare diseases

There are those things you learn that make you want to drop everything, and pull the kids out of school for a round of hugs and ice cream. The kind of things that transform nightly bed-time tantrums into positively delightful problems.

Things that make you question the existence of a higher power.

Juvenile Batten Disease is one. If there’s something worse, I’d rather not know about it, thank you very much.

Juvenile Batten Disease is horrific enough—if you really must know, I’ll dive into those gruesome details later. What makes it extra-spicy evil is not just that it afflicts small children. It’s the rarity of it.

Yes, if you’re weighing the odds that it will someday destroy your family. No, if you hope to someday soon see a cure.

The horrible truth is that rare diseases don’t show up on a lot of researchers’ radar. And for the few that do focus their energies on rare diseases, the funding stream is probably outstripped by the youth soccer league budget in Harlan, Iowa.

I don’t know if Harlan even has a youth soccer league, but if they do, I’d wager they’re the best little soccer players in southwest Iowa. And no matter how well-heeled those kids might be in cleats and shin guards, it’s a far cry from what’s needed to cure something like Juvenile Batten Disease.

It occurs in about one of every 100,000 live births. It’s a genetic disorder that must be present in both parents before passing it on to any children. Even then, there’s a one in four chance the child will actually develop the disease.

But those that do must endure a gut-wrenching progression of symptoms that sound almost medieval for the torment they must cause. It usually begins right about the time they might be enrolling in things like youth soccer. Kids develop vision problems at 4- to 8-years-old. As the disease slowly kills brain cells, they steadily regress skills they’ve learned and then decline into blindness, seizures, behavioral issues, and dementia. Eventually, they are bed-ridden husks of their former selves.

The rarity of this wretched disease is indeed a blessing, but it complicates things too. Big pharmaceutical companies gamble anytime they fund a research project. I don’t know about you, but my palms sweat just picking Powerball numbers. Pharmaceutical firms? They risk billions.

When a researcher thinks she has an idea that might work on a rare disease, the unavoidable fact is not enough people live with the disease to justify paying for the needed research.

We can lament this fact of capitalism all we want, but companies don’t remain in business very long if they can’t pay the bills.

But something unexpected happened recently.

PlasmaTech Biopharmaceuticals, which has since changed its name to Abeona Therapuetics, went all-in on destroying Juvenile Batten Disease. They signed a deal with a researcher here who thinks she has a way to do more than ease the symptoms of the disease. 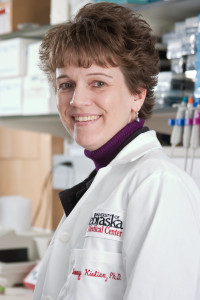 A professor in the Department of Pathology and Microbiology at the University of Nebraska Medical Center, Tammy Kielian, Ph.D., learned about the disease when her niece, Olivia, was diagnosed in 2012. Kielian immediately focused her energy, skill and expertise on Juvenile Batten Disease.

Now she has the help of a good corporate citizen. It will be years before this develops into a product that could help families, but good news like this doesn’t come along every day.

This kind of news calls for hugs and ice cream.

*UPDATE-June 22, 2015—On June 19, 2015, PlasmaTech Biopharmaceuticals announced that it changed its name to Abeona Therapuetics “to reflect broader rare disease commitment,” according to a press release on CNN Money. The text above was updated to reflect the company’s name change.

One Response to The trouble with fighting rare diseases