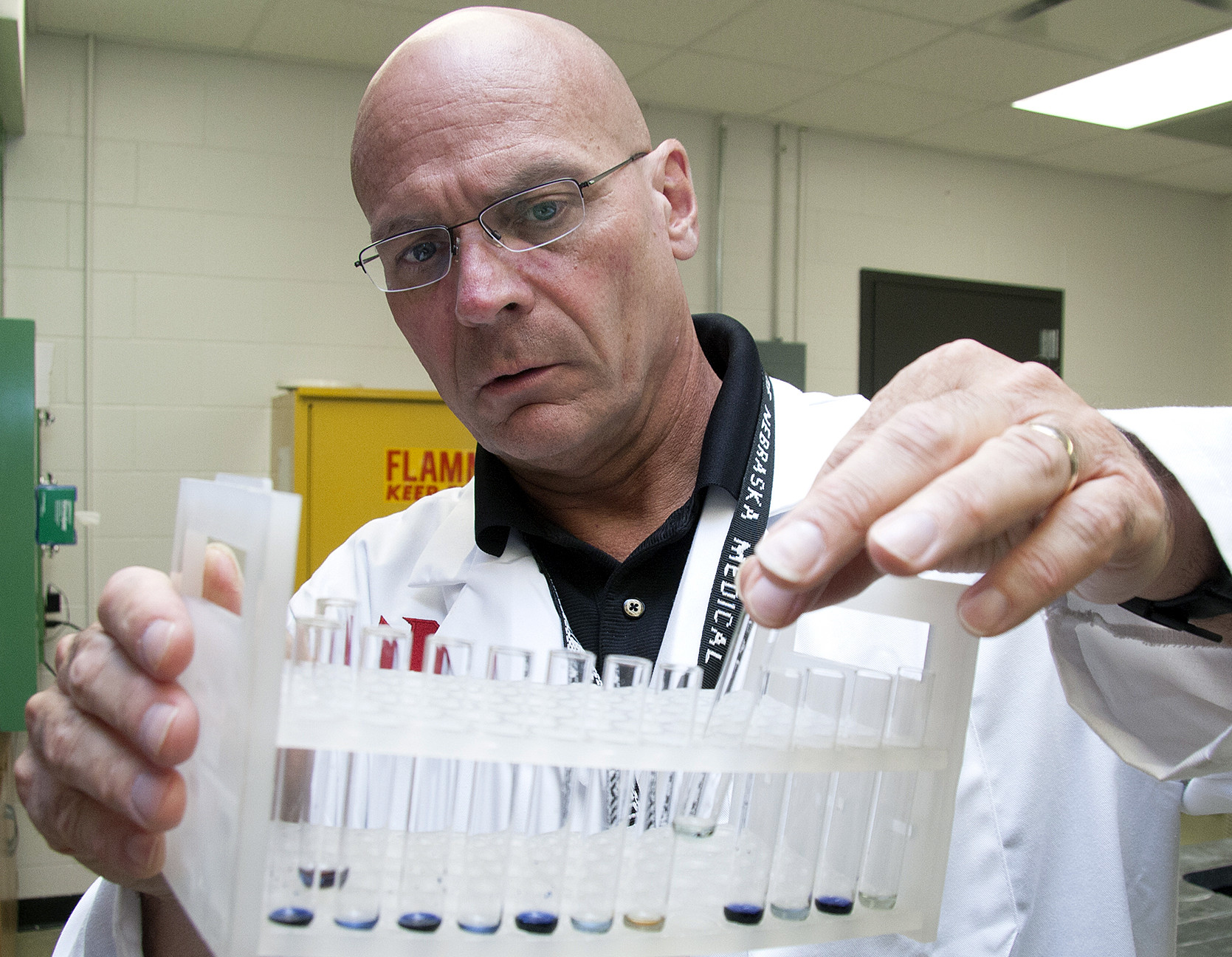 UNMC researcher Sam Sanderson, Ph.D., checks the results of a recent quality control test at his Omaha lab. His startup company, Prommune, has scheduled a test for a new H1N1 vaccine on pigs in Aug. 2015. (Photo: Charles Litton)

Omaha, Neb. (August 24, 2015)—A swine flu H1N1 vaccine developed at the University of Nebraska Medical Center will enter a definitive round of testing in the coming weeks, and researchers hope to establish its ability to ward off the virus in pigs.

Made possible by a licensing deal brokered through UNMC’s technology transfer office, UNeMed Corporation, the study will evaluate the vaccine on 30-40 pigs.

If tests yield results as expected, Prommune, Inc. could begin offering an H1N1 vaccine to hog farmers as early as the end of the year—although full approval from the USDA would likely take another three or four years.

Ultimately, an H1N1 vaccine as potentially effective as Prommune’s could dramatically diminish the virus as a global threat to the world’s pig population, and could even lead to more effective vaccines for similar diseases in birds and perhaps humans. 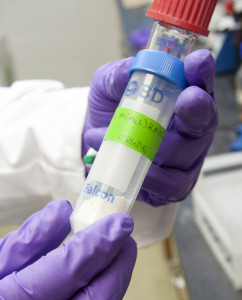 Prommune, a company founded on the research of UNMC’s Sam Sanderson, Ph.D., is building a vaccine that could protect pigs from H1N1. A test in Aug. 2015 is expected to prove the vaccine’s effectiveness, and could lead to other vaccines in other animals and perhaps even humans. (Photo: Charles Litton)

Prommune, Inc. was built around the research of Sam Sanderson, Ph.D., who founded the company in 2002. Sanderson is currently a research associate professor of pharmaceutical science in UNMC’s College of Pharmacy. Sanderson’s technology essentially helps activate and direct the immune system into a more targeted and efficient attack against invading pathogens.

The technology, an immune stimulating peptide called EP67, is a “platform technology” that is so versatile it can be tweaked and modified to work against a number of ailments and in a wide variety of animals. In addition to the H1N1 vaccine, EP67 could have applications against different varieties of the avian flu virus, antibiotic-resistant bacteria, and other infectious agents.

But long before Prommune can develop anything for human use, researchers still need to compile years of data—beginning with the planned trials in coming weeks, said Prommune’s interim CEO Sam Al-Murrani, Ph.D.

Al-Murrani joined Prommune in March, after first meeting Sanderson at an animal health investment forum in Kansas City back in 2013. Al-Murrani, who has a background in animal health and holds a doctorate in immunology and biochemistry, said a platform technology like EP67 would intrigue investors and strategic partners. Several recent initial public offerings in the animal health sector didn’t compare well to Prommune’s innovative technology, he said.

“I think Prommune today—today—has more product and market potential than any of those companies,” he said.

Al-Murrani is the chief executive officer of Babylon BioConsulting, a firm based in Cheyenne, Wyoming, which specializes in bringing early-stage technologies to biomedical markets.

Since signing on with Prommune in March, Al-Murrani has helped Prommune build a corporate structure, negotiated the licensing deal with UNeMed and established a strategic alliance with a nationally renowned animal testing facility that helped open the door to the upcoming trial.

About Prommune Inc.: Prommune is a research and development company that has created a unique and patented means to safely and effectively awaken the body’s own natural immune defenses without inflammatory side-effects. Such immune activation is possible through the use of novel immune stimulatory peptides, which are derived from a naturally-occurring protein component of the immune system. The use of these host-derived immune stimulatory peptides provides a broad therapeutic platform enabling the treatment of normal and antibiotic-resistant infections and the rapid generation a huge variety of new vaccines for human and veterinary medicine.

One Response to Prommune will test swine flu H1N1 vaccine