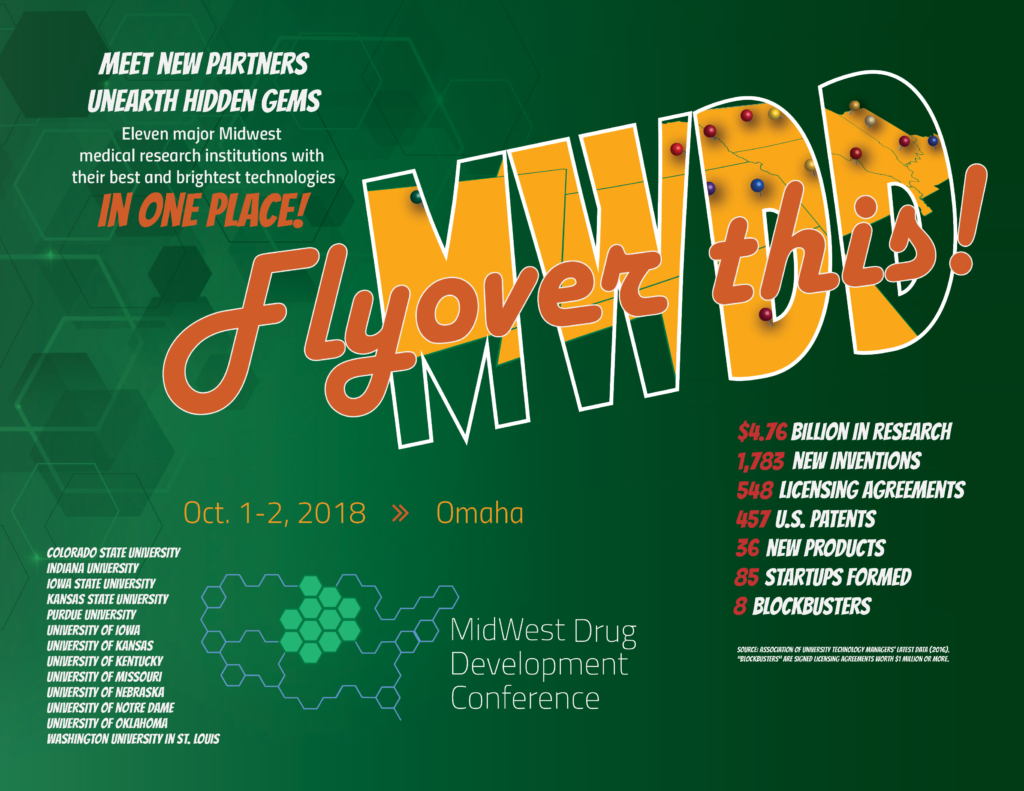 OMAHA, Neb. (July 25, 2018)—A new conference will bring together about a dozen Midwestern universities with major pharmaceutical firms as a way to promote early-stage medical technologies, officials announced today.

The event is called the Midwest Drug Development Conference, and is hosted by the University of Nebraska Medical Center’s technology transfer and commercialization office, UNeMed.

The primary goal of the event is to create one event where pharmaceutical firms and investor groups can learn about the latest therapeutic technologies and startup companies. The conference is exclusively aimed at Midwestern universities, but the industrial and investors groups could span the globe.

“I really dislike the term ‘flyover country,’ but there’s no escaping that perception,” UNeMed president and CEO Michael Dixon said. “We have a ton of research talent and innovation at Nebraska, and so do our friends across the region. Putting us all under one roof gives those companies a good reason to get on a plane to see what they’re missing.”

A closer look at the 13 participating universities shows that they collectively accounted for $4.76 billion in research, produced $71.4 million in revenues for their universities, disclosed 1,783 new inventions, created 85 new startup companies, and produced 36 new products in 2016 alone.

Planners hope to build on the region’s activity, and create more opportunities for academic medical researchers. The aim is then translating those opportunities into collaborative partnerships that move innovations and discoveries into further development.

The conference will feature more than 50 presentations of Midwestern universities’ early- and middle-stage technologies and startups. The 10-minutes presentations will cover a wide scope of conditions and diseases, including cancer, infectious diseases and central nervous disorders, to name a few.

The Midwest Drug Development Conference will be held on Oct. 1-2, 2018 in the Omaha Marriott Capitol District.

Register at www.midwestdrugdevelopment.com/tickets. Through a generous sponsor, a limited number of registration fees will be waived for potential investors and biotech and pharmaceutical company representatives. Contact UNeMed to learn how to receive a waiver code.